Following Apple's unveiling this week of Macs with the M1 chip, Serif has released new versions of its Affinity apps for Mac that include support for macOS Big Sur and compatibility with Apple Silicon machines. 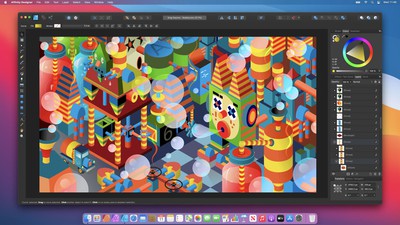 This is great news for our users because the architecture of the ‌M1‌, particularly having such a high-performance GPU with unified memory with the CPU, is perfect for professional creative applications. The advantages are particularly noticeable when working on documents with thousands of pixel layers, vector objects and text. Edits to pixel layers are best handled on the GPU, while vector and text on the CPU, so when you have unified memory, it allows much faster handling of these complex documents.

‌M1‌ also allows many more elements such as adjustment layers and live filters to be maintained before performance is constrained, allowing for a more non-destructive workflow, even in complex documents.

The 1.8.6 update for Affinity apps on macOS is now available.

xxray
Affinity has always been innovative and quick to be innovative. Their philosophy since day 1 of really optimizing performance for Apple devices, along with no subscriptions, really is so commendable. I can’t wait for the day that I get to try using their products on Apple Silicon Macs.
Score: 21 Votes (Like | Disagree)

James_C
Affinity Photo is a great App, used that to replace Photoshop three years ago. I have not looked back.
Score: 18 Votes (Like | Disagree)

RFolk
Awesome Affinity. Probably one of the best alternative to Adobe at the moment . (with an affordable price)
Score: 13 Votes (Like | Disagree)

citysnaps
Sadly, Affinity still does not have an Adobe Lightroom equivalent. Still hoping for the future.
Score: 9 Votes (Like | Disagree)

b656
Optimized for M1 or not, I have to say Affinity apps are absolutely fantastic. I love them so much that I feel guilty I got them during a sale.
Score: 9 Votes (Like | Disagree)

Jupeman
All Hail Affinity. I am happy they exist as an alternate. I'm a happy user!
Score: 8 Votes (Like | Disagree)
Read All Comments

Friday May 7, 2021 1:51 am PDT by Tim Hardwick
An early look at an ongoing analysis of Apple's App Tracking Transparency suggests that the vast majority of iPhone users are leaving app tracking disabled since the feature went live on April 26 with the release of iOS 14.5. According to the latest data from analytics firm Flurry, just 4% of iPhone users in the U.S. have actively chosen to opt into app tracking after updating their device...
Read Full Article • 196 comments