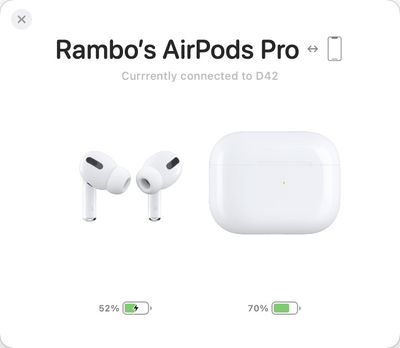 AirBuddy 2 is meant to make connecting AirPods and Beats headphones to a Mac as seamless as connecting to an iOS device. When AirPods are near a Mac with AirBuddy 2 installed, a window pops up that lets you click to connect. Battery life is displayed in the menu bar or in the Today center, and a swipe lets you change to a new listening mode.

You can connect iPhones, iPads, and other Macs running AirBuddy 2 to your main Mac to monitor battery life, and in addition to making it easy to swap devices with headphones, it's also designed to make it simple to transfer a Magic Mouse, Magic Trackpad, or Magic Keyboard between Macs with a click.

Custom connection modes are available to set listening mode, volume, and microphone access when AirPods connect to a Mac, and the app offers up historical data about headphone usage such as listening time, call time, and battery life for 12 hours, 24 hours, or the prior day.

Does Big Sur do most of this ?

bpeeps
How much did MacRumors get for this ad?
Score: 8 Votes (Like | Disagree)

Upgraded immediately, I loved v1. This update has addressed every minor gripe I still had with the app. I just wish Apple would add this functionality to macOS itself

Come back tomorrow for Big Sur. It IS added to MacOS. At least the basic functionality of connecting the AirPods automatically. Looks like a lot of new features were added. Not a surprise. Since the main purpose of the app is now handled by the OS, you either drop your project, or find other ways to add value for your customers.
Score: 7 Votes (Like | Disagree)

Honestly, I don’t know. I just purchased the upgrade and have not seen anything that Big Sur does natively.

If people are walking into macOS Big Sur expecting AirPods functionality other than automatic device switching (which sucks on the Mac right now due to misuse of audio APIs) they’re in for some sore disappointment.

Then what on earth are you basing your posts on? Have you been running the last 11.0.1 beta (likely GM) since it came out and actually tested these BT functions? If not, then what? Just pulled something out of the air for sh*ts and grins?
Score: 5 Votes (Like | Disagree)

Then what on earth are you basing your posts on? Have you been running the last 11.0.1 beta (likely GM) since it came out and actually tested these BT functions? If not, then what? Just pulled something out of the air for sh*ts and grins?

Yes, I’ve been testing automatic device switching since it was available and kept my Mac updated. It’s still a mess on the Mac — rapidly improving, but enough of a mess that I have had to disable sound effects on multiple apps and even websites so that (for example) a new chat sound effect from Facebook’s website doesn’t cause audio to switch over to my Mac from my iPhone while playing music. Unless Apple has begun blacklisting certain high-profile incidents like these, and I don’t know why it would/should, these edge cases will continue to be a nuisance for the foreseeable future, pending updates on developers’ end.

An example of something that AirBuddy 2 allows that macOS Big Sur doesn’t is so-called “connection modes,” which resolves a major nuisance for me, an iMac user stuck on Bluetooth 4.2. Sometimes, when connecting my AirPods, macOS likes to choose the AirPods for both output and input, which given Bluetooth 4.2’s reduced bandwidth means atrocious output audio quality until you manually switch the input back to the built-in mics. It does this randomly, even with nothing open that could possibly need the microphone and certainly nothing actively using it. It’s best to just eliminate the issue altogether by telling it to connect for output only when connecting; AirBuddy allows this, and macOS alone doesn’t.
Score: 4 Votes (Like | Disagree)

ersan191
Yep best to release this before Big Sur comes out and people figure out that 90% of it is baked in to the OS now.
Score: 4 Votes (Like | Disagree)
Read All Comments