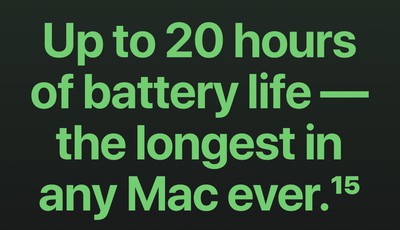 Long battery life is enabled through the four high-efficiency cores that are included in the ‌M1‌. Apple says that alone, the four cores offer similar performance as the dual-core ‌MacBook Air‌ but at much lower power, providing an efficient way to run simple tasks like checking email or browsing the web.

WestonHarvey1
Someone tell me why this is bad.
Score: 29 Votes (Like | Disagree)

Return Zero
Several multiples faster and almost twice the battery life at the same price, yet it seems like all I see are complaints about longevity and upgradability... some people will literally never be happy, and it's 100% by their own choice.
Score: 27 Votes (Like | Disagree)

Looks like very limited RAM options with the unified memory if I read it correctly as part of the SOC.

Excellent for compute workloads but lacking the choice, particularly at the moment, to expand it ourselves.

It will be really interesting to see how they approach the more user upgradeable market i.e. the 27" iMac (probably will go) and the Mac Pro.

How do you expand RAM yourself in current MBAs and MBPs?
Score: 11 Votes (Like | Disagree)

So, the only things that make the Pro a Pro are the touchbar and more weight? I can't imagine someone saying, yeah I really want a touchbar and I'm willing to pay $300 for it... and I really prefer a heavier laptop.:rolleyes:

No. Why do people keep saying this? The M1 may be the same chip but it will be able to operate much faster for longer periods of time with the fan in the Pro. Also, the screen, battery, speakers, mic, and charger are much better on the Pro as well. It takes all of 15 seconds to figure this our for yourself.
Score: 10 Votes (Like | Disagree)

Someone tell me why this is bad.

Never! It's glorious. The best! The fastest! The most efficient! The super duperest...most amazingest mac ever made. It's even better than macs made last year! And it's better than everything else in the world, including 98% of pcs!
Score: 10 Votes (Like | Disagree)

Mdracer
These specs that you are all complaining about are all the lower end MacBook Pros, keep that in mind, before you lose your mind.
Score: 9 Votes (Like | Disagree)
Read All Comments

Tuesday May 11, 2021 11:56 am PDT by Joe Rossignol
Last month, Apple introduced a new iPad Pro with the same M1 chip found in the latest Macs, and early benchmark results indicate that the M1 iPad Pro is over 50% faster than the previous-generation iPad Pro. Based on five legitimate Geekbench 5 results (here's the fifth) for the fifth-generation 12.9-inch iPad Pro with the M1 chip, the device has average single-core and multi-core scores of...
Read Full Article • 394 comments

Saturday February 6, 2021 3:17 pm PST by Joe Rossignol
Nearly three months after the launch of Apple's rave-reviewed M1 Macs, Intel has fired back, but there are some asterisks involved. In a slideshow shared by PCWorld this week, Intel highlighted what PCWorld described as "carefully crafted" benchmarks in an attempt to prove that laptops with the latest 11th Generation Core processors are superior to those with Apple's custom-designed M1 chip. ...
Read Full Article • 637 comments