Demand for Apple TV+ programs is increasing as its shows become more popular in the United States, according to demand data from research company Parrot Analytics (via Business Insider). 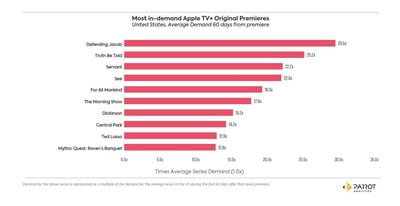 ‌Apple TV+‌ mostly underwhelmed audiences and critics in the months after its launch, and this has been supported by data based on social media, fan ratings, and piracy. However, new research by Parrot Analytics shows that the streaming service's "second wave" of original programs was much more popular with audiences than its launch titles, suggesting that it is gaining momentum after a lackluster start.

"Defending Jacob" was Apple's biggest original series so far based on viewership, desire, and engagement. The show was on average 29.5 times more in demand than the average series in the U.S. during its first 60 days on the platform. The second most in-demand ‌Apple TV+‌ show was "Truth Be Told," followed by M. Night Shyamalan's "Servant." None of the top three shows were part of ‌Apple TV+‌'s launch lineup.

Although comedy "Ted Lasso" only places ninth, Parrot Analytics noted that the show is quickly catching on with viewers, receiving positive word-of-mouth. While Defending Jacob was fast to attract an audience, demand for Ted Lasso has been slow but steady, eventually overtaking Defending Jacob.

Overall, the data suggests that ‌Apple TV+‌ is finding its feet as a streaming platform despite its slow start, with the demand for its original programs increasing over time.

Only watched The Morning Show and Servant. The first was great the second good enough, other than that I tried to watch Amazing Stories and Truth Be Told but quit as both the acting and writing were appalling. Also watched On The Rocks, which was terrible story-wise. The other shows and movies are plainly uninteresting to my liking... I'm betting on Foundation to save this service which quite frankly seems doomed since the very beginning.

Check out Ted Lasso and Mythic Quest: Raven's Banquet. Both are terrific in their own way. Ted lasso is optimistic and wonderful, Mythic Quest is just hilarious and sweet, and the middle-of-the-season episode is probably the best movie on the whole service.
Score: 11 Votes (Like | Disagree)

Cosmosent
The last episode of See (season 1) was Excellent !
Score: 8 Votes (Like | Disagree)

itsmilo
I really enjoyed Ted Lasso even tho I don’t care about football and liked The Morning Show even though every character on that show deserves what’s coming to them.

i also tried Defending Jacob and literally watching Servent right now but I have this rule that if I end up playing with my phone in the first episode, then I should stop watching. Both are so slow! And Servent doesn’t even have a Chris to look at
Score: 6 Votes (Like | Disagree)