Facebook is now rolling out a new disappearing messages feature to all WhatsApp users on iOS and Android, allowing messages, photos, and videos to be marked to disappear after seven days (via TechCrunch). 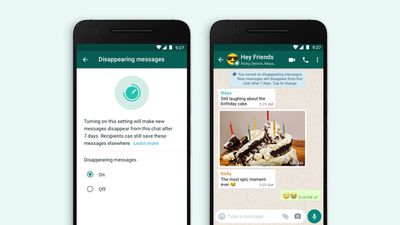 Users can use the feature for direct messages, and it can be enabled in groups by members with administrator privileges. The seven-day limit exists regardless of whether the recipient reads the message or not, with the timer starting from when the message is sent.

Facebook also hinted at potentially offering a wider range of time limits in the future:

"We will keep an eye on feedback about how people are using it and liking it and see if it needs adjusting in the future," a spokesperson for Facebook said. "For now we are starting with seven days, because it feels like a nice balance between the utility you need for global text based conversations and the feeling of things not sticking around forever."

The implementation of the feature was reportedly delayed by the need for end-to-end encryption:

"[End-to-end encryption] was partly why it took us so long to implement this feature, because we wanted to retain the e2e capabilities that WhatsApp users expect and love," the spokesperson remarked.

There are also indications that Facebook may be looking to carry over the feature to its Messenger app, where it would sit in addition to the pre-existing "secret" messaging feature which allows the sender to control how long a message remains in a separate feed. This seems increasingly likely given Facebook's long-term plan to merge Messenger, Instagram, and WhatsApp chat platforms.

Earlier this week, WhatsApp began rolling out a new and improved way to manage storage in the app, helping users identify, select, and bulk delete GIFs, photos, and videos that may be filling up their device.

As with the recent storage changes, the new disappearing messages feature will not be enabled by default. It will instead need to be actively turned on in settings.

And yet still no multi-device support.
Telegram is better than whatsapp in almost every way.

Yes, and most importantly Telegram isn’t owned by Facebook. I really hope some regions start moving away from WhatsApp as the de facto messaging platform... I’m looking at you, Southeast Asia.
Score: 5 Votes (Like | Disagree)

miq
And yet still no multi-device support.
Telegram is better than whatsapp in almost every way.
Score: 5 Votes (Like | Disagree)

Oz.
I will stick with iMessage and Signal.
Score: 3 Votes (Like | Disagree)

JosephAW
Still have my first iMessage from my iPhone 4 now on my iPhone 11 Pro Max. Digital pack rat! :p
Score: 3 Votes (Like | Disagree)

Drogba11
I don’t know why iMessage doesn’t allow you to delete messages for everyone. Too many times I’ve commented accidentally in a group chat.
Score: 3 Votes (Like | Disagree)

I don’t know why iMessage doesn’t allow you to delete messages for everyone. Too many times I’ve commented accidentally in a group chat.

Yeah I often get drunk and make threats i shouldn’t. This would be helpful. No need to catch court cases for one foolish, impassioned, drunken, indiscretion.
Score: 2 Votes (Like | Disagree)
Read All Comments