Last week Apple removed the Apple TV Remote app from the App Store, given that the app's functionality has been baked into the Control Center on iPhone and iPad since iOS 11. Following the Remote app's discontinuation, a former Apple engineer took to Twitter to share some interesting details about the app's original development. 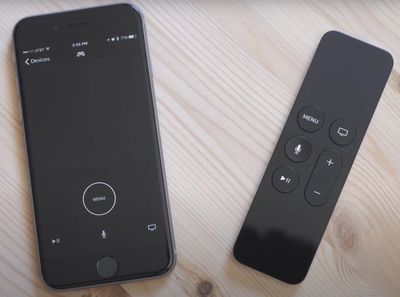 Alan Cannistraro writes that he began writing the app in 2006 before he even saw the first ‌iPhone‌ user interface, and instead used his own UI elements to begin with. The former designer explains that the Remote app was Apple's first production app that the ‌App Store‌ team used to "test their upload flow" to the Store, and while it only shipped with iTunes and ‌Apple TV‌ controls, early prototypes were a lot more functional.

While we shipped it only with iTunes and Apple TV control, my prototype also allowed me to turn on/off lights, TVs and Receivers (via an IR adaptor), and save and resume a room’s state as a "Scene".

A year later (2009) I had also built prototypes in Remote that would let your phone touchscreen be your mouse for your computer, and to interact with photos, applications (the original TouchBar) and screensavers on your Mac.

I was pitching a larger idea around device communication that never got off the ground (too early?). Predecessor to HomeKit & AirPlay. I had devices from Denon, Marantz, Sharp that spoke a protocol I designed so you could turn them on/off, change inputs and volume, tone, etc.

Another prototype Cannistraro designed in 2009 turned the ‌iPhone‌'s touchscreen surface into a computer mouse, and also offered a way for Mac users to "interact with photos, applications (the original TouchBar) and screensavers."

Cannistraro says he showed the app to then-Apple CEO Steve Jobs, who was so impressed with the way it let you control the ‌Apple TV‌ with swipes and gestures that he wanted the next hardware ‌Apple TV‌ remote to work similarly.

In 2010, I sat down with with Steve to show him how Remote controlled Apple TV with swipes, and he said, “our next Apple TV Remote should be this without a screen”. It took five years (lots of stuff paused when Steve died), but eventually Siri Remote came out and was just that.

On reflection, Cannistraro says he believes the "ultimate vision" for Remote still hasn't been realized, and that smart home control remains a "disjointed experience" on any ecosystem. "HomeKit and Alexa are getting us closer," he says, "but there is still much to do to make the rooms we live in into elegant, ambient, intelligent experiences. Working on it."

You can check out Cannistraro's TV Remote app comments in full using this Thread reader link.

Wiesenlooser
Maybe it is just me but I believe the remote would be infinitely better if it had a taptic engine that would make you "feel" gliding over the panels. I thin kthe lack of tactile feedback is really what makes this hard to use
Score: 27 Votes (Like | Disagree)

MakeAppleAwesomeAgain
I think if Steve had a chance to interact with the actual remote, he would have changed his mind. They made a huge mistake by holding on to Steve's original thought, which could change from minute to minute. Not a great idea to base a product around a 4/5 years old Jobs opinion.
Score: 26 Votes (Like | Disagree)

Invisible Elf
The TV-remote is a piece of **** and I still have problems of using it accurately, despite owning the Apple TV for years now. So stupid ****ing design
Score: 21 Votes (Like | Disagree)

profets
I must be in the extreme minority, but I love using the Siri remote (geez that even sounds sarcastic).

Seriously, its simple, I know where the buttons are without looking, quick volume access, and very smooth scrolling, srubbing, etc.
Score: 16 Votes (Like | Disagree)

It's too small, too slippery, and too sensitive. An accidental nudge with my foot will frick up what I'm watching and I'm pretty sure that on several occasions I didn't even touch it and the breeze from my hand or a fart set it off.

(I do like the idea of it, but the implementation leaves something to be desired. It's a perfect example of form over function.)
Score: 16 Votes (Like | Disagree)

Tuesday June 8, 2021 2:00 am PDT by Tim Hardwick
Apple alongside the second-generation Apple TV 4K debuted a redesigned version of the Siri Remote, which is now available to customers with new ‌Apple TV‌ orders and as a $60 standalone replacement for the original ‌Siri‌ Remote. In lockstep with the hardware change, iOS 15 also includes a redesigned Apple TV Siri Remote interface in the Control Center. In iOS 14, the current Remote...
Read Full Article • 34 comments

Thursday July 15, 2021 10:40 am PDT by Juli Clover
Elago is known for its range of clever case designs for Apple's devices, and its newest case designed for the Apple TV Siri Remote adds the one feature that Apple left out - Find My functionality. With the Apple TV Siri Remote R5 Case, there's space to insert an AirTag at the back, which means that if you ever lose your remote, you can locate the AirTag that's inside with the Find My app. ...
Read Full Article • 128 comments