Facebook has today announced a new series of cloud-streamed games for its app and website, but the service will be unavailable in-app to iOS users due to Apple's App Store policies (via CNBC). 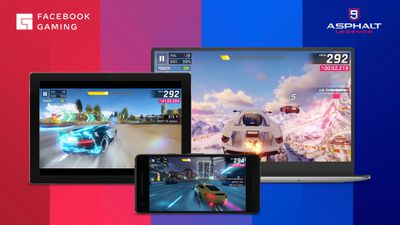 Facebook explained in its announcement that the games will not be spun off into a separate cloud gaming service, instead remaining within Facebook's app and website.

The first set of games available this week include "Asphalt 9: Legends" by Gameloft, "Mobile Legends: Adventure" by Moonton, "PGA TOUR Golf Shootout" by Concrete Software, Inc., "Solitaire: Arthur's Tale" by Qublix Games, and "WWE SuperCard" by 2K Games. "Dirt Bike Unchained" by Red Bull is set to be added in the coming weeks.

The company says that cloud-streaming games will bring cross-play to Facebook for the first time, as well as cloud-playable ads for interactive demos, intended to "blur the line between games and ads." The games will be coming to a redesigned "Destination for Play" on Facebook for resuming games and discovering new ones.

Facebook's cloud gaming solution is not comparable to subscription services such as Google Stadia, Amazon Luna, or Microsoft's xCloud, since the company has focused on versions of mobile games that are initially free to play, rather than AAA titles.

"We think this will expand very quickly because we're not charging up front and you don't need to have a controller," said Jason Rubin, Facebook's vice president of special gaming initiatives.

However, the new cloud-streamed games will not be available on iOS. Facebook says that this is due to Apple's "arbitrary" ‌App Store‌ policies.

Apple does not allow apps to act as third-party app stores, refusing apps that distribute software "in a store or store-like interface." Apple now says that apps can offer a subscription to multiple games, but only if each game can be approved by Apple and is offered in its own app.

Although Facebook could theoretically bring cloud gaming to iOS via the browser version of Facebook, the company has no plans to do so.

"We don't want people going to web Facebook 20 times a day. We have a great app," Rubin said. "We would have to use Apple's technology and browser on iOS, and that isn’t optimized to the benefit of cloud games," said Rubin.

When Facebook users make a micro-transaction in a cloud-streamed game in a browser, 30 percent of revenue will go to Facebook and 70 percent will go to the game developers. For purchases made on Android, Facebook will not take a cut, and instead, its 30 percent goes to Google.

The snipe at Apple appears to be the latest in an ongoing feud between the two companies. In August, Facebook was forced to remove the games feature from its Facebook Gaming app on iOS for violating ‌App Store‌ policies.

TonyC28
“Blur the line between games and ads”

cmaier
Considering that Facebook is essentially destroying the world, they should shut their piehole.
Score: 15 Votes (Like | Disagree)

Stevez67
There's nothing arbitrary about the rules; you can't be a third party App Store. Ads "blurring the lines between ads and games" is just creepy.
Score: 11 Votes (Like | Disagree)

There's nothing arbitrary about the rules; you can't be a third party App Store. Ads "blurring the lines between ads and games" is just creepy.

Also, a terrible experience. If they built ads into my PS4 games, I'd be out instantly.

I never understood the mobile gaming craze in general; maybe it's because I grew up on consoles, but I feel like it's the best option (PlayStation or Xbox). I tried a few games on my phone, but instantly lost interest. I still love my PS4 though.
Score: 7 Votes (Like | Disagree)
Read All Comments