This week's addition to Apple Arcade is The Survivalists, an island-themed sandbox game where players explore, build, craft, trade, and even train monkeys with up to three friends in a desperate bid to survive. 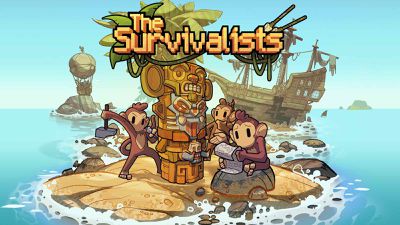 Available on the iPhone, iPad, Mac, and Apple TV, The Survivalists comes from British game studio Team17, known for games like Overcooked, Worms, and The Escapists.

From the App Store description:

Hunt (or be hunted by!) animals for food and an array of mythical enemies, who aren't necessarily pleased to see you. Get quests from a Mysterious Stranger or find them washed up on the shore. Prepare to trek into a procedurally generated wilderness, with a variety of biomes, for an adventure that's unique to every player.

Apple Arcade is Apple's subscription-based gaming service, priced at $4.99 per month or $49.99 per year. The service provides users with access to over 100 games across the iPhone, iPad, Mac, and Apple TV, with no ads or in-app purchases. The games can be downloaded from the Arcade tab of the App Store with an active subscription.


The Survivalists is also launching on the Nintendo Switch, Xbox One, PlayStation 4, and PC today.
Tag: Apple Arcade Guide
[ 31 comments ]

HappySponge
Apple Arcade is not monkeying around
Score: 8 Votes (Like | Disagree)

Plutonius
I hope that Apple invest in some of the AAA game companies to get them to develop for ARM Macs.

This doesn't look like a bad game but it will never replace the games we will be missing out on when Macs no longer support bootcamp.
Score: 8 Votes (Like | Disagree)

linkmaster02
Some people will go ape for this.
Score: 7 Votes (Like | Disagree)

Does that make me old when I say this?
Score: 4 Votes (Like | Disagree)

Wow whoever plays this is going to have a heck of a tail to tell.

You’re that guy with the bad puns after a few good ones.
Score: 4 Votes (Like | Disagree)
Read All Comments

Monday August 30, 2021 9:27 am PDT by Joe Rossignol
Apple today announced that LEGO Star Wars Battles from TT Games and Warner Bros. Games is coming soon to Apple Arcade for the iPhone, iPad, Mac, and Apple TV. A specific release date has not yet been shared, but users can sign up to be notified when the game is available by tapping on the "get" button on the game's Apple Arcade listing. Developed by TT Games Brighton and published by Warner...
Read Full Article • 16 comments