Benchmarks leaked over the weekend gave us some insight into the performance of the A14 Bionic chip in the iPad Air that's set to launch soon, and also revealed another tidbit -- Apple's newest tablet has 4GB RAM. 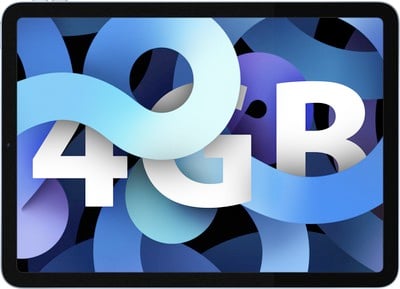 That's 1GB over the prior-generation iPad Air that had an A12 Bionic processor, but less RAM than is available in the iPad Pro models. Apple's 2020 ‌iPad Pro‌ models all have 6GB RAM.

With the jump in RAM and the impressive performance of the A14 chip, the new ‌iPad Air‌ is quite a bit speedier than the prior-generation model, plus it has the all-display design with Touch ID Power button, a first for Apple.

Notably, the benchmark results suggest other devices equipped with the A14 chip, such as Apple's iPhone 12 lineup, will also see notable speed improvements. The A14 is a step up in terms of performance and efficiency because it is Apple's first chip built on a smaller 5-nanometer process. Reduced node sizes result in higher power chips that use less power, bringing gains in battery life and speed. The 5-nanometer A-series chips are also expected to be used in upcoming Macs with Apple Silicon, though the Macs may use an upgraded A14X variant that's even faster.

Apple is planning to release the new ‌iPad Air‌ with A14 chip at some point in October, though no launch date has been announced. It's reasonable to expect the new ‌iPad Air‌ to come after the debut of the new ‌iPhone 12‌ models because the tablet does contain new technology (the A14 chip) that Apple may not want inspected thoroughly ahead of the debut of its flagship iPhone lineup, despite the benchmark leak.

now i see it
The component cost a RAM for Apple is probably a couple bucks at most yet they're always are so stingy with it like it's unobtainium or something.
Score: 23 Votes (Like | Disagree)

I sure hope not! I don’t think iOS would work with just 6 Megabytes of RAM. ?
Score: 14 Votes (Like | Disagree)

ghanwani
The speed is too much for me. Looking forward to the iPad Zen with a slow processor that emphasizes stillness.
Score: 9 Votes (Like | Disagree)

rjp1
I don't want Apple to always try to have the latest hardware and best specs, but come on. 4GB is just embarrassing in 2020. It is frustrating if you use multiple apps.

Their cheapness is legendary, but they are priced and marketed as a premium brand.
Score: 9 Votes (Like | Disagree)

QCassidy352
The new air is very impressive, but the problem with it remains price/storage. Unless you’re ok with 64 GB, the Air gets very close in price to the Pro, which still has a number of advantages (including the RAM, as mentioned here).
Score: 9 Votes (Like | Disagree)
Read All Comments

Thursday March 4, 2021 6:48 am PST by Mitchel Broussard
Amazon today is discounting the 256GB Wi-Fi iPad Air to $679.99, down from $749.00. This marks a new lowest-ever price on this model of the 2020 iPad Air, with previous sales hitting at around $699 for the tablet. It's available in Green, Rose Gold, Sky Blue, and Space Gray. Note: MacRumors is an affiliate partner with Amazon. When you click a link and make a purchase, we may receive a small...
Read Full Article • 10 comments

Thursday October 1, 2020 3:42 am PDT by Tim Hardwick
Last month Apple unveiled a redesigned iPad Air with slimmer bezels that it said would become available in October, but it didn't give an exact date for when it would start taking orders. With October now upon us, there are indications that the new iPad Air could launch imminently, rather than later on in the month. According to a tweet late on Wednesday from well-connected Bloomberg...
Read Full Article • 108 comments

Major Upgrades Coming to the iPad in 2021

Friday February 12, 2021 7:20 am PST by Hartley Charlton
Apple is looking to launch an updated ninth-generation iPad with a larger display, the A13 Bionic chip, 4GB of RAM, and a thinner, lighter design in the first half of this year, according to recent reports. Reports from cnBeta and Mac Otakara, citing supply chain sources in China, have offered similar projections for the ninth-generation ‌iPad, explaining that the updated device will...
Read Full Article

Tuesday September 15, 2020 11:00 am PDT by Joe Rossignol
Apple today introduced a redesigned iPad Air with slimmer bezels, paving the way for an all-screen design similar to recent iPad Pro models. In addition, the new iPad Air is the first Apple device with Touch ID built into the power button. The new iPad Air is powered by the new 5nm-based, six-core A14 Bionic chip for up to 40 percent faster performance and up to 30 percent faster graphics...
Read Full Article • 414 comments

Saturday October 3, 2020 9:04 am PDT by Hartley Charlton
Benchmarks supposedly for Apple's A14 Bionic processor in the iPad Air 4, first spotted by Twitter user "Ice Universe," reveal that the A14 offers significant performance improvements over the iPhone 11's A13 Bionic. A GeekBench benchmark for an "iPad13,2" with the motherboard number J308AP was uploaded yesterday. According to leaker known as "L0vetodream," J308AP is the iPad Air 4 with...
Read Full Article • 344 comments