Last month Apple unveiled a redesigned iPad Air with slimmer bezels that it said would become available in October, but it didn't give an exact date for when it would start taking orders. With October now upon us, there are indications that the new ‌iPad Air‌ could launch imminently, rather than later on in the month. 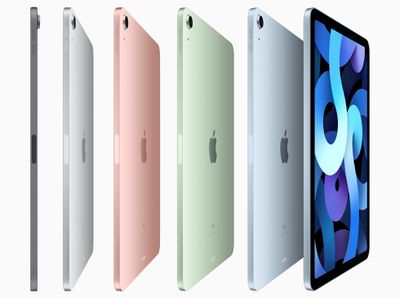 According to a tweet late on Wednesday from well-connected Bloomberg reporter Mark Gurman, "Apple marketing materials for the new ‌iPad Air‌ are starting to land at retail stores, suggesting a launch sooner rather than later."

The new ‌iPad Air‌ is the first Apple device with Touch ID built into the power button. That has allowed Apple to add a fully laminated 10.9-inch Liquid Retina display with True Tone, P3 wide color support, and an anti-reflective coating.

It's also the first time Apple has debuted a new AXX-series chip in an iPad before an iPhone. The new ‌iPad Air‌ is powered by the new 5nm-based, six-core A14 Bionic chip for up to 40 percent faster performance and up to 30 percent faster graphics than the previous-generation ‌iPad Air‌. It's the same chip expected to be used for the iPhone 12 and ‌iPhone 12‌ Pro models, which are expected to be announced this month.

Apple marketing materials for the new iPad Air are starting to land at retail stores, suggesting a launch sooner rather than later. Apple said October, which is tomorrow — so not a surprise. — Mark Gurman (@markgurman) September 30, 2020

Like the iPad Pro, the new ‌iPad Air‌ features a USB-C port instead of a Lightning connector, and similarly features a 12-megapixel rear camera for higher-resolution photos and 4K video recording.

It takes 2 secs to pull the mask down lol.

Not an option in every workplace
Score: 17 Votes (Like | Disagree)

It takes 2 secs to pull the mask down lol.

You cannot keep doing that every single time. It's a total nuisance.
Score: 13 Votes (Like | Disagree)

Seriously you don’t see why? It is because a lot of people (including myself) love that the shiny new gadget that they have bought is totally brand new and unused.....To me, the slight cost difference for the brand new air is much more appealing than a slightly cheaper second hand pro.
Score: 10 Votes (Like | Disagree)

Techwatcher
These are going to sell very well.
Score: 9 Votes (Like | Disagree)

I love that I'll be able to use touch ID at work while wearing a mask.
Score: 9 Votes (Like | Disagree)
Read All Comments

Monday March 29, 2021 6:11 am PDT by Mitchel Broussard
Today we're tracking a few deals across Apple's iPad Air and MacBook Air product lineup. In these sales, you'll have a chance to save up to $49 on both the 2020 iPad Air and the latest M1 MacBook Air. Note: MacRumors is an affiliate partner with some of these vendors. When you click a link and make a purchase, we may receive a small payment, which helps us keep the site running. iPad Air...
Read Full Article • 6 comments

Thursday March 4, 2021 6:48 am PST by Mitchel Broussard
Amazon today is discounting the 256GB Wi-Fi iPad Air to $679.99, down from $749.00. This marks a new lowest-ever price on this model of the 2020 iPad Air, with previous sales hitting at around $699 for the tablet. It's available in Green, Rose Gold, Sky Blue, and Space Gray. Note: MacRumors is an affiliate partner with Amazon. When you click a link and make a purchase, we may receive a small...
Read Full Article • 10 comments

Thursday April 8, 2021 6:25 am PDT by Mitchel Broussard
Fresh discounts on Apple's 2020 iPad Air lineup have appeared online this week, offering up to $50 off the 10.9-inch tablet. Both the 64GB and 256GB Wi-Fi models are available on sale at Amazon and B&H Photo. Note: MacRumors is an affiliate partner with some of these vendors. When you click a link and make a purchase, we may receive a small payment, which helps us keep the site running....
Read Full Article • 3 comments

Deals: iPad Sales Providing Up to $100 Off iPad Pro and iPad Air

Thursday March 25, 2021 8:02 am PDT by Mitchel Broussard
Today we're tracking a collection of discounts across Apple's iPad lineup, including solid ongoing discounts on both the 2020 iPad Pro and iPad Air. Prices for the iPad Pro start at $849.00 for the 256GB Wi-Fi 11-inch iPad Pro, and at $559.00 for the 64GB Wi-Fi iPad Air. Note: MacRumors is an affiliate partner with some of these vendors. When you click a link and make a purchase, we may...
Read Full Article • 9 comments

Tuesday October 20, 2020 4:56 am PDT by Hartley Charlton
The first unboxing video of the fourth-generation iPad Air has been shared online. The short video offers the first in-person look at the iPad Air's new Sky Blue color, packaging, and Touch ID in the power button. Other than some demo videos from a Chinese media event last month, this unboxing video appears to be the first of its kind, ahead of more detailed unboxings and reviews expected...
Read Full Article • 49 comments

Friday October 16, 2020 4:59 am PDT by Juli Clover
Alongside the new iPhone 12 and iPhone 12 Pro, Apple is offering pre-orders for the redesigned fourth-generation iPad Air, which was first introduced at Apple's September event. The iPad Air can be purchased from the Apple online store or through the Apple Store app. Priced starting at $599 for 64GB of storage, the 10.9-inch iPad Air features an edge-to-edge display with a unique Touch ID ...
Read Full Article • 87 comments

Tuesday September 15, 2020 11:00 am PDT by Joe Rossignol
Apple today introduced a redesigned iPad Air with slimmer bezels, paving the way for an all-screen design similar to recent iPad Pro models. In addition, the new iPad Air is the first Apple device with Touch ID built into the power button. The new iPad Air is powered by the new 5nm-based, six-core A14 Bionic chip for up to 40 percent faster performance and up to 30 percent faster graphics...
Read Full Article • 414 comments

iPad Air Shipments Arriving at Apple Stores Ahead of Launch

Friday October 9, 2020 11:51 am PDT by Juli Clover
Apple retail stores around the world are receiving shipments of new devices that are likely to be the new iPad Air models, according to Bloomberg's Mark Gurman. In a tweet, Gurman said that new devices have started arriving at Apple Stores "for opening at a later date." These new devices are likely the iPad Airs that are set to go on sale at some point in October as it's too early for the...
Read Full Article • 63 comments

Sunday January 23, 2022 10:32 am PST by Juli Clover
Apple is working on a number of new products that are set to launch this fall, and Bloomberg's Mark Gurman says that it will be "the widest array" of new devices that Apple has introduced in its history. In his latest "Power On" newsletter, Gurman explains that Apple is working on four new iPhones (5G iPhone SE, iPhone 14, iPhone 14 Pro, and iPhone 14 Pro Max), an updated low-end MacBook Pro,...
Read Full Article • 218 comments