Apple today released the first beta of iOS 14.2 to developers for testing purposes, and the new update introduces a Music Recognition control for the Control Center. 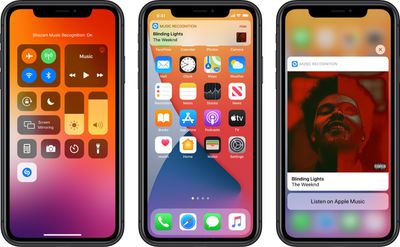 The new feature lets you discover music playing around you and it recognizes the music playing with in apps, even when you're wearing AirPods. Songs pop up as notifications, and you can tap to listen in Apple Music.

Apple devices have long been able to recognize songs through Shazam, but doing so at the current time requires asking Siri to identify a song or opening up the Shazam app for iOS devices. The new Control Center feature will make it easier to get a song recognized with minimal effort.

With today's update, Apple has also added a new music feature that displays ‌Apple Music‌ suggestions in the Control Center Now Playing widget when music is not being actively played. Redesigned media controls also make it easier to see and control AirPlay-connected devices like Apple TVs and speakers.

For those who have low vision, Apple introduced a new "People Detection" feature in the Magnifier app that is designed to use the camera to let iPhone users know how far away other people are.

The new iOS 14.2 beta will likely be in testing for some time as Apple works on releasing new iPhones. We're expecting new iPhones to debut sometime in October.

eddiezus
LMAO i was just bitching about Shazam removing the widget and not adding a new widget to replace it. I went as far as posting a shortcut as a widget just for them to pull this out the bag! ?
Score: 13 Votes (Like | Disagree)

dannyyankou
Oh that's cool. I have the Shazam complication on my Apple Watch.

Would be cool if they opened control center to developers.
Score: 7 Votes (Like | Disagree)

The Control Center should not look like the Home Screen, icons should be translucent with a white image

Wait until control center gets folders.
Score: 6 Votes (Like | Disagree)

Mr. Awesome
Hmmmm.... I just uninstalled the Beta profile.... but this might make me install it again. ?
Score: 5 Votes (Like | Disagree)

asdavis10
Finally. Been waiting for this integration since the acquisition. Going to love the convenience. Will be downloading 14.2 tonight.
Score: 4 Votes (Like | Disagree)

Nozuka
I've been wondering when we would finally get to see some "fruits" of this acquisition... ;)
Score: 3 Votes (Like | Disagree)
Read All Comments

Monday September 20, 2021 7:00 am PDT by Joe Rossignol
Just ahead of the release of iOS 15, Algoriddim today announced it has integrated Apple's new ShazamKit framework into its award-winning DJing app djay. ShazamKit brings Shazam's music recognition technology to the djay app, allowing users to discover music playing in their surroundings. Once a song has been identified, djay instantly loads it onto the virtual decks and plays the audio in...
Read Full Article • 14 comments