Following the debut of the new Apple Watch Series 6, the refreshed iPad Air, and the low-cost eighth-generation iPad, Apple has extended its Back to School sale in the United States, with the promotion now ending on October 12 instead of September 29. 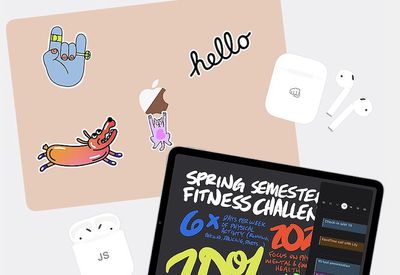 In addition to extending the dates of the sale, Apple has also updated its Terms and Conditions [PDF] to exclude the new ‌iPad Air‌ from the promotion. Customers who purchase one of the new $599 ‌iPad Air‌ models (which are not available for sale yet) will not be eligible to get free AirPods.

Prior to today's update, both the iPad Pro and the ‌iPad Air‌ were eligible products that customers could purchase to take advantage of the free AirPods promotion.

The Back to School Sale in the United States initially launched on June 15, and it provides a $159 credit toward the purchase of AirPods, AirPods Pro, or AirPods with Wireless Charging case for those who purchase a MacBook Air, MacBook Pro, iMac, ‌iMac‌ Pro, or ‌iPad Pro‌.

Apple launched Back to School promotions in Europe, Asia, Mexico, and the Middle East in July and the new ‌iPad Air‌ exclusion may also apply in other countries that previously allowed free AirPods with the purchase of an ‌iPad Air‌.

Someone, please, sell me on why I need a new iPad Air or iPad Pro.

I need a real push, cause how it feels right now this is a side step for me. (Trade in is $240, accessories not included.)

If your current hardware meets your needs, then don't buy anything new.

Get off the rampant consumerism bandwagon.
Score: 15 Votes (Like | Disagree)

Just because they’re not going to sit in physical classrooms, doesn’t mean kids aren’t in school - they’re just doing it online from home in most places. Which makes a new iPad or Mac even more helpful.
Score: 4 Votes (Like | Disagree)

Honestly, I don't think the new Ipad pro should be purchased without an update to it.

If the price delta is small (after selling off AirPods or if you were going to purchase regardless), the Pro still has nice features including more RAM, double the base storage, better GPU, better sound and Promotion. Those 5 things right there are easily worth the $100 premium to me. This assumes you can get $100 for reselling AirPods, which shouldn't be hard at all.
Score: 3 Votes (Like | Disagree)

Freida
Really? Don't buy anything. What you have is perfect for your needs. Its just lust taking over.

I have Air 2 and only now its start to show its age so I'll upgrade but your case, you can easily wait another year or 2.

Someone, please, sell me on why I need a new iPad Air or iPad Pro.

I need a real push, cause how it feels right now this is a side step for me. (Trade in is $240, accessories not included.)

invisibleshoes
If I get the iPad Pro 11" with educational pricing and sell off the AirPods, I think the price will almost be the same as iPad Air 4. Is this correct or is my math/pricing way off?
Score: 1 Votes (Like | Disagree)
Read All Comments

Deals: iPad Sales Providing Up to $100 Off iPad Pro and iPad Air

Thursday March 25, 2021 8:02 am PDT by Mitchel Broussard
Today we're tracking a collection of discounts across Apple's iPad lineup, including solid ongoing discounts on both the 2020 iPad Pro and iPad Air. Prices for the iPad Pro start at $849.00 for the 256GB Wi-Fi 11-inch iPad Pro, and at $559.00 for the 64GB Wi-Fi iPad Air. Note: MacRumors is an affiliate partner with some of these vendors. When you click a link and make a purchase, we may...
Read Full Article • 9 comments

Wednesday October 14, 2020 11:48 pm PDT by Juli Clover
Apple introduced the iPad Air at its September 15 event and at the time, said that the tablet would launch at some point in October. We're well into October, but Apple hasn't provided more information on when we might be seeing the new iPad Air models. Apple's website for the iPad Air still says "Available in October," but Best Buy's Canadian site is listing an October 23 release date,...
Read Full Article • 33 comments

Tuesday October 27, 2020 3:03 pm PDT by Juli Clover
Apple announced the new 2020 fourth-generation iPad Air in September, but the new tablets just started shipping out to customers last Friday. We picked one up and thought we'd do a hands-on comparison with the iPad Pro, which was last updated in March, because both tablets are about as powerful and share many similarities. Subscribe to the MacRumors YouTube channel for more videos. Design and ...
Read Full Article • 101 comments

Tuesday March 2, 2021 9:58 am PST by Mitchel Broussard
The 2020 iPad Air has a few discounts on Amazon and B&H Photo this week, starting at $549.00 for the 64GB Wi-Fi model. We've seen this device go lower to about $539.00 in past sales, but today's price tag is far more common and still a solid $50 discount on the latest iPad Air. Note: MacRumors is an affiliate partner with some of these vendors. When you click a link and make a purchase, we may ...
Read Full Article • 2 comments

iPad Air Shipments Arriving at Apple Stores Ahead of Launch

Friday October 9, 2020 11:51 am PDT by Juli Clover
Apple retail stores around the world are receiving shipments of new devices that are likely to be the new iPad Air models, according to Bloomberg's Mark Gurman. In a tweet, Gurman said that new devices have started arriving at Apple Stores "for opening at a later date." These new devices are likely the iPad Airs that are set to go on sale at some point in October as it's too early for the...
Read Full Article • 63 comments

Monday May 3, 2021 7:18 am PDT by Mitchel Broussard
Amazon and B&H Photo continue to offer solid deals on Apple's 2020 iPad Air lineup, with up to $74 off the 10.9-inch tablet in multiple colors. Both the 64GB and 256GB Wi-Fi models are available on sale at these retailers. Note: MacRumors is an affiliate partner with some of these vendors. When you click a link and make a purchase, we may receive a small payment, which helps us keep the site...
Read Full Article • 17 comments

Thursday October 15, 2020 4:01 pm PDT by Juli Clover
Apple hasn't provided release date information for the new 10.9-inch iPad Air, but Walmart this afternoon began accepting preorders for some models. Stock is limited, but Walmart is offering the space gray and rose gold models for preorder. According to Walmart, iPad Air purchases will ship out on Friday, October 23. Friday, October 23 is also the release date that was temporarily listed...
Read Full Article • 27 comments