Just a day after strings in Apple's own Apple Music app for Android suggested that the company's upcoming subscription bundle will indeed be called "Apple One," Apple acted to register a number of domain names for the term. The move further indicates that ‌Apple One‌ is likely to be the marketing name for the bundles rather than a placeholder. 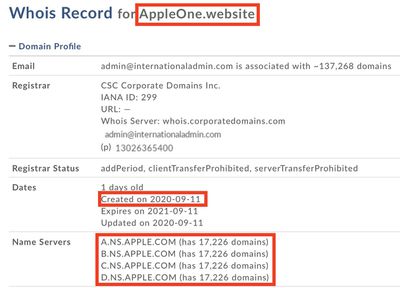 While Apple will likely not end up using many of the domain names, it is typical for the company to secure numerous variations in order to ensure that others do not have control of them.

Among the "‌Apple One‌" domain names registered by Apple yesterday:

Full contact information on the domain registrations is redacted for privacy, but given the significant batch of domains and the fact that all of them are pointing to Apple's nameservers, there is essentially no doubt that Apple is responsible for the registrations.

Apple has been able to register a number of less common versions of ‌Apple One‌ domains, but it does not yet control several of the most popular ones such as appleone.com and appleone.net. Both of those domains have been registered by others for well over a decade, and it remains to be seen if Apple will make an attempt to acquire them.

Apple may have some difficulty with appleone.com, which is the home of a fairly large employment agency, while appleone.net is currently parked and listed as available for sale.

The ‌Apple One‌ bundles, which could appear as soon as Tuesday's event or else alongside new iPhones next month, will involve several tiers of Apple's existing services offered at a slight discount. A basic package is expected to offer ‌Apple Music‌ and ‌Apple TV‌+, while a second tier will also include Apple Arcade. A third bundle tier will include all of the aforementioned services along with Apple News+.

Update 8:10 a.m.: Additional subscription bundle references such as "Cancel ‌Apple One‌" and "Keep ‌Apple One‌" have been discovered in localization files for the Manage Subscriptions screen in iOS 14 by 9to5Mac.

Among the "Apple One" domain names registered by Apple yesterday:

You guys are all way off the mark.

Apple is going to announce this week they've bought the country, Sierra Leone, in an effort to move production out of China. The entire country is going to be dedicated to producing iOS and MacOS devices.

Having ownership of an entire country means Apple can set the tax rates. Scared of another standoff with the EU, Apple intends to move it's worldwide services base from Ireland to Sierra Leone in order to maximise profits. All services revenue will be diverted through Sierra Leone. Or, to give it it's new name, App Leone.
Score: 81 Votes (Like | Disagree)

Apple Knowledge Navigator
Who would have guessed they’d update the Apple 1, of all their computers??
Score: 34 Votes (Like | Disagree)

now i see it
The guy who owns appleone.net is smiling right now $$$
Score: 15 Votes (Like | Disagree)

HiVolt
I truly wish they would allow you to choose the items in the bundle. I have no interest in Apple News or Apple TV, but I could be persuaded to a bundle that included Apple Music, Apple Arcade & iCloud storage.
Score: 15 Votes (Like | Disagree)

boss.king
Why wouldn't they go with Apple+? Most of their other services already use +, and Google already has a similar product called Google One.

They've made some very weird naming choices over the last few years.
Score: 15 Votes (Like | Disagree)
Read All Comments

Saturday May 1, 2021 3:57 am PDT by Sami Fathi
Citing sources within the music industry, Hits Double Daily reports that Apple is preparing to launch a new HiFi Apple Music tier in the "coming weeks," which will come alongside the release of the rumored third-generation AirPods. According to the report, the new tier, which will offer high-fidelity music streaming, will cost the same $9.99 monthly subscription as the current individual...
Read Full Article • 257 comments

Thursday August 13, 2020 3:41 am PDT by Hartley Charlton
Apple will launch a new range of subscription service bundles called "Apple One" as soon as October, according to a new report by Bloomberg's Mark Gurman. The series of bundles would allow customers to subscribe to several Apple digital services together. This is expected to result in a lower monthly price than when the services are subscribed to individually. Bloomberg reports that the...
Read Full Article • 193 comments