VIZIO today announced that the Apple TV app is now available on its 2016 and newer SmartCast TVs in the United States and Canada. 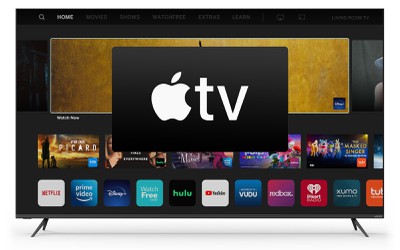 From today until October 16, eligible VIZIO SmartCast TV owners in the United States can sign up for Apple TV+ and receive three months free.

VIZIO rolled out HomeKit and AirPlay 2 support to its 2016 and newer SmartCast TVs last year.

darkslide29
Wow, all the way back to 2016! I wish all other manufacturers would follow.
Score: 4 Votes (Like | Disagree)

Packers1958
Hats off to Vizio for caring about customers with older tvs. LG wont beyond 2 years. I have a 4 year old LG E6 OLED and they wont update that tv. If Vizio can update a 4 year old tv, it proves the others can easily do the same if they wanted.
Score: 4 Votes (Like | Disagree)

That is too bad, I hate when manufacturing quality goes down just to sell more products.

In 2008 I bought Sony's first SXRD 1080P 60in rear projection TV. It was $6000, it was a good TV but to bring down the price from the $12000 Sony SXRD 70in they decided to put in plastic lens instead of glasses lens which caused over time the lenses to turn yellow or people would not put the TV on a UPS so if you lost power the SXRD LCD chip would bake in the TV. Thank god I purchased Sears $550 extended warranty, three years out before the extended warranty ran out I had sears replace the light engine. The cost of the the part was $2000. The funny thing when I called sears for the rear they had already done a few of them and said the repair would be $4000. I said no it won't it is free. They said what do you mean, I said I bought the sears extended warranty and it covered parts and labor. They said nobody bought the Sears $550 extended warranty. I said I did so they came and fixed it at no cost to me. That was the best extended warranty I ever purchased :)
Score: 3 Votes (Like | Disagree)

Wow, all the way back to 2016! I wish all other manufacturers would follow.

It’s easy for Vizio to do considering the limited number of Vizio TVs still working from 2016...
Score: 2 Votes (Like | Disagree)

BornAgainMac
I just checked my TV and it is there. I am shocked to see Apple do this.
Score: 2 Votes (Like | Disagree)

I'm not sarcastic, a serious question, so what is the major pro to buy Apple TV now? Games?

Monday May 10, 2021 10:41 am PDT by Juli Clover
Apple's upcoming iPhone 13 models will be slightly thicker than the iPhone 12 models and will also feature larger, thicker camera bumps with lenses that protrude less, according to iPhone 13 schematics seen by MacRumors. The new iPhone 13 and 13 Pro models are expected to feature a thickness of 7.57mm, up from 7.4mm in the iPhone 12 models. That's an increase of 0.17mm, which won't be hugely ...
Read Full Article • 127 comments

Monday May 10, 2021 8:51 am PDT by Hartley Charlton
Independent technicians have reportedly been able to use leaked MacBook schematics to aid repairs (via Vice). Last month, Apple supplier Quanta Computer was hit with an attack by the ransomware group known as "REvil," leading to a large quantity of internal Apple documents about both released and unreleased devices being exposed. The leaked PDFs, available on a number of forums and online...
Read Full Article • 85 comments