Apple today released iOS 13.7, a major update that comes more than a month after the release of iOS 13.6. iOS 13.7 is an update that's being introduced to roll out a new Exposure Notifications System that does not require an app to be downloaded for the feature to be turned on. 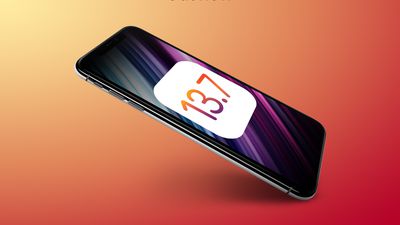 The iOS 13.7 updates are available on all eligible devices over-the-air in the Settings app. To access the updates, go to Settings > General > Software Update. Apple has also released a new version of iPadOS 13.7, but as Exposure Notifications don't work on the iPad, the ‌iPad‌ update focuses on bug fixes.

iOS 13.7 is likely to be one of the final updates to the iOS 13 operating system as Apple shifts its focus to iOS 14. We could see iOS 14 released in the coming weeks if the update is decoupled from new iPhones, or in October when the new iPhones are expected to debut.

Ahh yes, downloading an update that has a feature you can completely turn off is tyranny.
Score: 25 Votes (Like | Disagree)

Are you aware of how much data was just collected about you when you posted this comment on a public forum?
Score: 19 Votes (Like | Disagree)

This should be a solid/polished update.

Konigi
My release notes suggest something completely different (in Canada): new Memojis and shareable iCloud Drive folders from the Files app. Nothing about updated Exposure Notifications.

Dude...cell phones could be tracked since they first became a thing many years ago. This isn't anything new.

TheYayAreaLiving ?
This should be a solid/polished update.
Score: 8 Votes (Like | Disagree)
Read All Comments

Tuesday November 23, 2021 8:15 pm PST by Eric Slivka
Earlier today, Apple announced that it had filed suit against NSO Group, the firm responsible for the Pegasus spyware that has been used in state-sponsored surveillance campaigns in a number of countries. NSO Group seeks to take advantage of vulnerabilities in iOS and other platforms to infiltrate the devices of targeted users such as journalists, activists, dissidents, academics, and government...
Read Full Article • 73 comments

Tuesday September 21, 2021 1:22 pm PDT by Juli Clover
With iOS 15, Apple expanded the Do Not Disturb feature from iOS 14 into a full Focus Mode option that's designed to allow users to set up different scenarios to manage their incoming notifications. Focus Mode is handy because it lets you decide exactly what alerts and apps you want to see at home, while at work, when sleeping, when exercising, and in other situations, but as Reddit users...
Read Full Article • 124 comments