Apple today seeded the sixth beta of an upcoming tvOS 14 update to developers for testing purposes. Designed for the fourth and fifth-generation Apple TV models, the new ‌tvOS 14‌ beta comes one week after the release of the fifth beta. 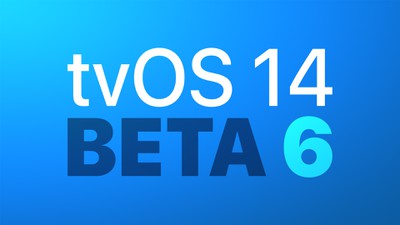 ‌tvOS 14‌ introduces Picture in Picture, a feature that lets you watch movies or TV shows in a small window in the corner of the screen while you do something else on the ‌Apple TV‌.

There's a new Home section in the Control Center on ‌Apple TV‌ in ‌tvOS 14‌, which allows HomeKit-connected devices to be controlled right from the TV. There's an option to view HomeKit camera feeds on the larger screen of the television or in Picture in Picture mode so you can keep an eye on your house at all times.

There's an option to manually choose a screensaver category in ‌tvOS 14‌, and for those who watch YouTube, ‌tvOS 14‌ supports watching YouTube videos in 4K for the first time.

For more on the new features coming in ‌tvOS 14‌, make sure to check out our roundup. ‌tvOS 14‌ is expected to be released this fall alongside iOS and iPadOS 14.

DinkThifferent
I had hoped Apple would update and streamline the (settings) menu in tvOS 14. It's a mess right now and not in line with iOS and iPadOS.
Score: 4 Votes (Like | Disagree)

BWhaler
Ugh…they still haven’t fixed the buggy mess that is the Apple TV app. e.g large libraries don’t load, loses track of what you’ve watched on purchases, too many ads—often for things you’ve already paid for and watched.

The low quality of the Apple TV app punishes Apple’s best customers. The same thing happened with iTunes and corrupting metadata, etc., and we all became Spotify customers for life. Hope Apple doesn’t blow it on subscriptions too.
Score: 4 Votes (Like | Disagree)

Just updated and tested a handful of 4K video on tvOS. Unlike the rest of the OS line up still nothing.

Waiting on Google, Apple and or new hardware? Time will tell. Public release may show the final answer in September/October.
Score: 4 Votes (Like | Disagree)

Isn’t this really up to Google?

Yes. The current YouTube app 2.04.06 was made in 2019, and this April 2020 issue is just a minor bug fix. I also seen lip-sync issues using it. It's old needs a update like that new release for iOS and IPadOS.

I wonder if this has already been submitted by Google and Apple hasn't updated the version in the store?
Score: 2 Votes (Like | Disagree)

agsystems
" tvOS 14 supports watching YouTube videos in 4K for the first time"
NO - I am sure there is someone at MacRumors that loves to irritate me :mad:
Score: 1 Votes (Like | Disagree)

Ugh…they still haven’t fixed the buggy mess that is the Apple TV app. e.g large libraries don’t load, loses track of what you’ve watched on purchases, too many ads—often for things you’ve already paid for and watched.

The low quality of the Apple TV app punishes Apple’s best customers. The same thing happened with iTunes and corrupting metadata, etc., and we all became Spotify customers for life. Hope Apple doesn’t blow it on subscriptions too.

Wish they would make Apple TV+ into its own app. I’ve liked the shows I’ve watched so far, but I hate, hate, hate having to deal with the Apple TV app.

As it stands, I won’t renew just because of that.
Score: 1 Votes (Like | Disagree)
Read All Comments

Monday June 14, 2021 12:50 pm PDT by Juli Clover
Some M1 iMacs appear to have a manufacturing defect that causes the display to be mounted on the stand in a way that's not perfectly aligned, leading to a crooked display. YouTuber iPhonedo over the weekend published a review of the M1 iMac, and he found that his machine appeared to be tilted on one side, a mounting disparity that was visibly noticeable and proved with a ruler. Another...
Read Full Article • 280 comments