Apple nixed its AirPower wireless charger in May 2019 after it was unable to manufacture the device in a way that would meet Apple's standards, allegedly due to problems with overheating and reliability. 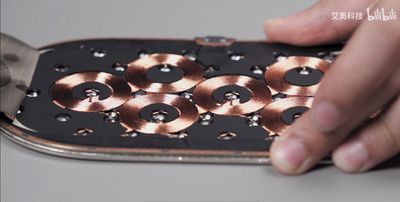 Leaker Mr-white (@laobaiTD), who has in the past shared leaked component photos and details on Apple's plans, today tweeted some photos that he claims feature the now-dead AirPower, which are from a Chinese social network.

The images feature a charging mat in an AirPower-like shape, with multiple wireless charging coils inside and a circuit board laden with chips that would serve as the brains of the device.

Apple designed the ‌AirPower‌ so that it could charge an iPhone, AirPods, and Apple Watch by placing the devices anywhere on the charging mat, and the overlapping charging capabilities are supposedly where it ran into trouble when designing the ‌AirPower‌, but other wireless chargers on the market also use a multi-coil technique.

We don't know if these photos actually depict the ‌AirPower‌ as there's nothing in the design that specifically ties them to Apple. The photos were originally sourced from a BiliBili, a Chinese video site, and Mr-white also shared the original video which has a few other views of the device in question.

Though work on the original ‌AirPower‌ was cancelled, there have been rumors from dependable sources that indicate some kind of wireless charger is still coming. Apple analyst Ming-Chi Kuo said in January that Apple is working on "a small wireless charging mat," which could debut at some point in 2020.

Back in June, leaker Jon Prosser shared photos of the alleged ‌AirPower‌ that was still in the works, but those photos ultimately turned out to be faked and from a wireless charger that is not an ‌AirPower‌ nor designed by Apple.

AngerDanger
Glad they found a way to recycle all those butterfly keyboards.

Konigi
Apple not releasing a product because it was allegedly overheating... It must have been HELLA hot, cause it wasn't a reason not to release a couple of generations of Macbooks.
Score: 19 Votes (Like | Disagree)

lazyrighteye
Can’t for the life of me figure out how that might overheat.
Score: 12 Votes (Like | Disagree)

Fake or not, I was not expecting such a busy logic board.

The same, that looks horrendously expensive (from a manufacturing standpoint) - just the board.
Score: 9 Votes (Like | Disagree)

mrat93
Fake or not, I was not expecting such a busy logic board.
Score: 9 Votes (Like | Disagree)

The same, that looks horrendously expensive (from a manufacturing standpoint) - just the board.

That's most likely another reason why it was canceled.

High cost of manufacturing + excessive heat gets you an expensive product with short lifespan.
Score: 8 Votes (Like | Disagree)
Read All Comments