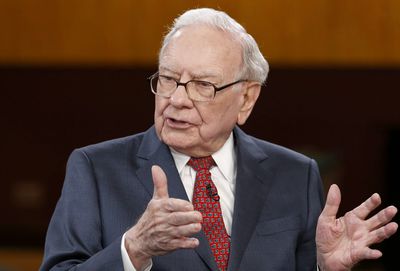 Subtracting Apple shares and cash, the remainder of Berkshire Hathaway is valued by the market at just $240 billion, which is surprising given the scale of Berkshire Hathaway's operations. The company owns many businesses, including Geico, See's Candies, Dairy Queen, Duracell, Fruit of the Loom, NetJets, Precision Castparts, PacifiCorp, MidAmerican Energy, the BNSF Railway, and Marmon, which itself owns more than 100 manufacturing and services businesses.

Warren Buffett held 245 million Apple shares as of the end of June, representing a 5.7% stake in Apple as a whole. The stock price of Apple has soared by over 57% to an all-time high this year, boosting the value of Berkshire's Apple holdings by more than $40 billion to around $113 billion as of yesterday. Apple is by far the largest investment held in Berkshire Hathaway's portfolio, worth more than four times as much as its second-largest holding, a $25 billion stake in Bank of America.

These calculations were completed before Apple passed a market value of two trillion dollars earlier today. Berkshire Hathaway's holdings have been particularly exposed to the global health crisis in recent months via its multiple insurance, manufacturing, retail, and service businesses, but this has been largely offset by the soaring value of Apple shares. The value of the firm's Apple stake relative to the rest of its portfolio highlights the extent to which investors are increasingly favoring tech companies and neglecting more traditional businesses such as banks and insurers.

KaliYoni
Apple's market cap is not relevant to how Warren Buffett and Charlie Munger, Buffett's business partner, manage BRK's portfolio. Instead, they are focused on what they call intrinsic value. They talk about this in some fashion every year in the Annual Report, but the core concept is fully laid out in their Owners Manual on page 22:
https://berkshirehathaway.com/ownman.pdf

Yes, BRK does sit on a lot of cash. One reason is Buffett places a lot of importance on having a fortress balance sheet so that BRK is never in a position to have to borrow money under duress. Another reason is that BRK is really an insurance and reinsurance company in many ways. That means it has to maintain a certain amount of cash to ensure it can pay claims. This is especially important for BRK's non-consumer insurance lines, such as disaster insurance, that have unpredictable and potentially gigantic payouts.
Score: 3 Votes (Like | Disagree)

Vanilla35
He's also buying gold, so I'm definitely not taking his advice on everything. With that said, I still like apple even at this price.
Score: 2 Votes (Like | Disagree)

fundamentally, they are a phone handset company with very little on the horizon.

what-?
Warren has made sooo many unforced errors these last few years, from Kraft-Heinz, to the airlines to Occidental Petroleum. It's his lieutenants that purchased Apple, and Amazon. Without these core holdings and in the qty BRK owns them, we'd be throwing dirt on the grave of this 19th century conglomerate.
Score: 2 Votes (Like | Disagree)

It pains me to this day that I didn't have the cash to invest in Apple Stock in 1997 when it was about $11 dollars per share and everyone thought Apple would go bankrupt. I knew deep down that wasn't going to happen because Steve Jobs had just returned to Apple. I could've been a millionaire by now :( Also, fun side note...I live just a few blocks away from Warren's house in Omaha.

And with all the splits the shares were the equivalent of less than $1 a share. I'm glad I had some cash and did buy some back in 2005 at an equivalent share price of $8. :)
Score: 2 Votes (Like | Disagree)
Read All Comments

Saturday February 4, 2023 10:05 am PST by Eric Slivka
Online retailer TigerDirect has slashed pricing on the M1 iPad Air in several colors, offering the base 64GB configuration for just $313.99 in Purple and Pink. Note: MacRumors is an affiliate partner with TigerDirect. When you click a link and make a purchase, we may receive a small payment, which helps us keep the site running. That's a savings of 48% compared to Apple's normal $599.00...
Read Full Article • 488 comments