Apple is holding off on expanding production in Vietnam until workers' conditions improve, according to local news reports. 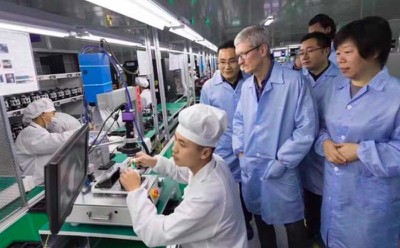 The reports indicate that Apple representatives visited Vietnam earlier this month to investigate existing Luxshare-ICT facilities. Luxshare-ICT has apparently not met Apple's welfare requirements yet, which include adequate dormitories and living conditions for workers. Luxshare-ICT has set out to improve the conditions to expand production for Apple.

"The Apple side continually surveyed the workshop of Luxshare-ICT Vietnam in Bac Giang on iPhone production conditions. Apple is impressed by the speed at which our facility is built here. At the same time, through practical research, Apple highly appreciates the potential in Bac Giang province and hard-working workers," said Tang Due Bang, Foreign Affairs Manager of Luxshare-ICT Vietnam.

Apple demands that manufacturers offer dormitories for workers near manufacturing plants. As Luxshare-ICT Vietnam cannot meet the huge demand for workers, the company has sought to hire workers from further afield. Apple is concerned that this would mean workers have to travel too far to work, and is therefore asking for more nearby dormitories to be built. Construction is waiting on permission from local government.

In May, AirPods Pro manufactured in Vietnam began circulating, and it has been widely rumored that Apple has already begun production of the upcoming AirPods Studio there. Luxshare hopes to expand to manufacture iPhones and Apple Watches in the region.

Major Apple manufacturing contractors Foxconn, Pegatron, and Compal Electronics are reported to be expanding production in Vietnam. Companies are increasingly reducing reliance on China and diversifying supply chains to prevent concentration risks. Vietnam is emerging as a major manufacturing and assembly hub for large technology companies, and Samsung manufactures as many as half of its smartphones there already.

I'm not comfortable with the term "dormitories". It sounds as if workers will be impounded there for as long as the factory needs them. If Apple had encouraged the development of "affordable housing" in the area, it would imply that workers could go home but don't have far to travel.

This is how factories work in China, too. Many of the Chinese workers are migrant workers who come to work work in plants, live in the dormitories, and travel home only a few times a year to see their families. If you are not comfortable with this, you would probably be shocked if you went to visit Chinese manufacturing, particularly behind the scenes. The world benefits from this not-quite-slave labor and turns a mostly blind eye to it. I appreciate that Apple cares about Vietnam conditions, and I suspect they have done a lot in China (as do a lot of larger US companies), but anything mid tier or lower is likely horrible slave-like conditions. That's how we (the world) have allowed it to happen... <typed to you on a MacBook Pro assembled in China...>
Score: 11 Votes (Like | Disagree)

Tim Cook pretending to understand what is happening in this scene...

Tim Cook has been a master of supply chain management and is one to the key facilitators of Apple's recovery with the return of Steve Jobs in the late '90s. He did not achieve that by not understanding processes or being stupid. Obviously there are virtually no qualifications required to comment on his abilities. Woohoo, MacRumors rocks!
Score: 9 Votes (Like | Disagree)

Who would do them? You know 100,000 Americans willing to sit in one spot gluing batteries into cases all day?
Score: 8 Votes (Like | Disagree)

I7guy
Regardless of some of the snark, this does show that Apple is indeed interested in ensuring it's manufacturing partners provide some minimum standards of working conditions.
Score: 7 Votes (Like | Disagree)

johnnytravels
Tim Cook pretending to understand what is happening in this scene...
Score: 4 Votes (Like | Disagree)
Read All Comments