AirPods Pro Starting to Be Assembled in Vietnam

Apple has been seeking to add geographic diversity to its supply chain for some time now, with a shift of some production of the AirPods lineup to Vietnam being one significant step for the company. 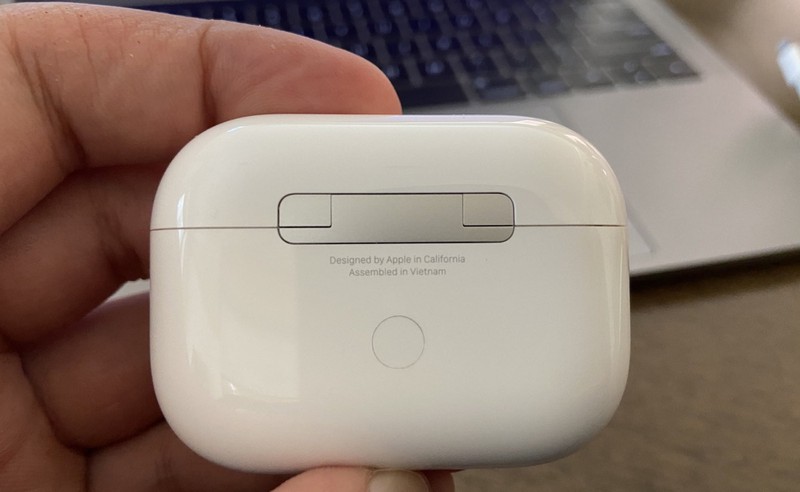 Photo via @alixrezax
Apple reportedly began trialing production of regular ‌AirPods‌ in Vietnam almost a year ago, and it was reported in December that Apple's ‌AirPods‌ suppliers were looking to line up financing to expand production.

And just two weeks ago, Nikkei reported that mass production of regular ‌AirPods‌ in Vietnam had started in March.

"The mass production of ‌AirPods‌ in Vietnam started as early as in March," a person familiar with the matter said. "The Vietnamese officials even granted special permits for a key Apple ‌AirPods‌ assembler to help the company bring in engineers to the country for smooth production during lockdowns." Vietnam began easing some lockdown measures in late April.

At the time, Nikkei said that the production shift did "not yet include" the higher-end AirPods Pro, but it now appears that ‌AirPods Pro‌ production has indeed begun in Vietnam as several MacRumors readers including @alixrezax on Twitter and "rhyzome" in our forums have reported this week receiving their ‌AirPods Pro‌ with "Assembled in Vietnam" shown on the charging cases.

Vietnam has long been a hotbed for Apple's audio accessory production, with even older models like wired EarPods having been produced in the country, and it looks like there's no sign of a slowdown. In fact, a report earlier this week claimed that Apple's over-ear "AirPods Studio" headphones will be partly produced in Vietnam from their debut for the first time, with shipments expected to begin in June or July.

Production of Apple products in Vietnam may also be expanding to the iPhone, as DigiTimes reported yesterday that Apple has asked its ‌iPhone‌ manufacturing partners to expand production in India and Vietnam. Key partner Foxconn already has significant assembly facilities in the country.

Amplelink
Glad they are diversifying their supply chain out of China. Hopefully all major companies follow suit.
Score: 23 Votes (Like | Disagree)

architect1337
I'm not going to buy anything 'Made In China' anymore. It's quite tough and companies like Samsung need to advertise their products are made in Korea. Apple and Microsoft need to do the same.
Score: 17 Votes (Like | Disagree)

I'm not going to buy anything 'Made In China' anymore. It's quite tough and companies like Samsung need to advertise their products are made in Korea. Apple and Microsoft need to do the same.

I mean you can't buy pretty much anything at all in that case. I bet even the on these 'assembled in Vietnam' products the majority of the component supply chain operates in China.
Score: 10 Votes (Like | Disagree)

LizKat
Some of the posts in here suggest that even if the writers have enough dough to buy a dozen sets of AirPods they wouldn't think of dropping a few bucks into an eye opening subscription to either the Financial Times or the Wall St. Journal.

But carry on. Always interesting to see how long a thread like this can persist on unvoiced political opinions (wrong forum for that, eh?!) rather than on anything to do with either the cost of doing business in the era of global trade or the diplomatic and political considerations of supply chains in East Asia... where China has more influence now than does the USA.... and where China has been engaged for some time in studying how to reduce its own reliance on US technology for the good of its own supply chains and economy... and where Vietnam is still playing catch-up.

Oh and by the way for those unaware, Vietnam is also definitely run by a distinctly communist government that enthusiastically uses a modified form of capitalism to conduct business and help its economy and citizens prosper.

So for those fascinated by abandoning US conduct of business in China primarily because the current US head of state has been engaged in a trade war with Xi, far be it from me to suggest moving this thread over to PRSI, but don't forget who won the right to form a government in a reunified Vietnam when the American war was over. It wasn't France, nor the USA, nor the erstwhile colonialist puppet government of South Vietnam. The main difference between China's president and Vietnam's prime minister is how many citizens say "how high" when either one of those heads of state says "jump". And as Americans have already learned in both countries, that can apply to managers of foreign manufacturing companies that locate supply chains in either one.

Both of these Asian countries (as well as Laos, Cambodia, Myanmar and dare I say Taiwan as well) are interested in competitive economic partnerships with the USA and not in being subsumed by any particular US flavor of the month politics. I'd assume that's the case for US companies too, whether considering their business abroad or at home.

Most of us are not CEOs of American behemoths with supply chains in Asia. Talking about moving them is cheap. Way cheaper than getting up to speed on the subject anyway, eh?

BGPL
Anywhere but China. It's going to be rough making that transition, especially in places like Amazon. I'm glad Trump started holding China accountable for their biased trade agreements. There was lots of crying when he started doing that a few years back but now everyone's eyes have been opened and it's plain to see it was the right move. At this point, if we start to lose China, it will force US companies to source elsewhere.

Let it begin.
Score: 6 Votes (Like | Disagree)
Read All Comments