As Apple battles with Epic Games over its App Store fees, Facebook is joining the fight over its new Paid Online Events feature, which allows small businesses in 20 countries to charge Facebook users to attend online classes and events. 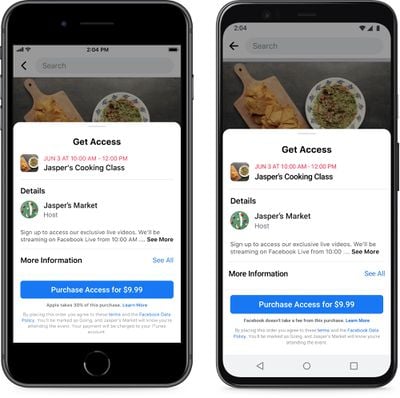 Facebook wants Apple to waive its 30 percent fee taken from in-app purchases or let Facebook process event payments with Facebook Pay, both of which Apple has refused.

We asked Apple to reduce its 30% App Store tax or allow us to offer Facebook Pay so we could absorb all costs for businesses struggling during COVID-19. Unfortunately, they dismissed both our requests and SMBs will only be paid 70% of their hard-earned revenue. Because this is complicated, as long as Facebook is waiving its fees, we will make all fees clear in our products.

When a business owner schedules an event through Facebook on iOS, Facebook will make it clear that Apple is taking a 30 percent cut of the purchase price. Facebook is waiving its own fees for the feature "for at least the next year."

Transactions done on the web or on Android where Facebook Pay is available will allow business owners to keep 100 percent of revenue generated from paid online events. The feature is meant to allow Facebook Page owners to create an online event, set a price, promote the event, collect payment, and host the event all on Facebook.

Without calling out Apple directly, Facebook's announcement for the new feature says that businesses "shouldn't have to worry about fees charged by platforms" and points out that Apple's fees will make it so businesses will only be paid "70 percent of their hard-earned revenue."

Other companies, including Airbnb and ClassPass, have made similar complaints about Apple's refusal to waive in-app fees for virtual classes and features that have been forced to transition to online due to the ongoing pandemic.

Airbnb offers online experiences like virtual cooking classes and meditation sessions, which Apple also collects fees from. Apple has refused to grant special permission to apps like ClassPass, Facebook, and Airbnb in the name of fairness for other developers who are subject to the fees.

They really should shut up.
Score: 91 Votes (Like | Disagree)

DinkThifferent
Oh boohoo Mark Zuckerberg. Do we all get a 30% fee for all our data you sell?
Score: 86 Votes (Like | Disagree)

TravelsInBlue
People who fail to see the issue with all of this really need to put down the Apple Kool-aid. Sure, App Store purchases make sense to have a commission fee, but does it make sense for Apple to take 30% of every single transaction within the ecosystem, even inside of each app?

Quu
Funny to me how all these multi-billion dollar businesses are coming out of the woodwork to demand lower fees. I don't necessarily side with Apple on this issue but it's hard to feel sorry for these giants.

If any of them were in Apples position to have a smash hit phone ecosystem they would undoubtedly do the same. Heck Epic Games takes a cut from the games on their game store as an example.
Score: 31 Votes (Like | Disagree)

atoqir
Spotify, Netflix, Epic, Microsoft, Facebook (WhatsApp/Instagram/Messenger) should have all did the same what Epic did yesterday and get their apps pulled.

With that much leverage Apple would be forced to act quickly.

I am a huge Apple fan, but they got very bad points for blocking innovation like xCloud because I am a gamer.

They should just allow sideloading of stuff they don't want to approve. Everybody happy. They can even keep their 30 percent then without issue.
Score: 18 Votes (Like | Disagree)
Read All Comments