Apple is taking legal action against the developers of the app "Prepear" due to its logo, according to iPhone in Canada. 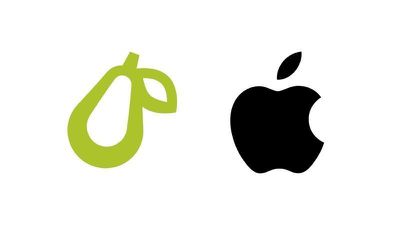 Prepear is an app that helps users discover recipes, plan meals, make lists, and arrange grocery deliveries. The app is a spinoff of "Super Healthy Kids," and the founders claim that they are facing litigation from Apple. Apple reportedly takes issue with Prepear's logo, arguing that its attributes are too similar to its own logo.

The company said via a post on Instagram that Apple "has decided to oppose and go after our small business' trademark saying our pear logo is too close to their apple logo and supposedly hurts their brand". The post goes on to describe the action as "a big blow to us at Prepear," and sets out the intention to retain the original logo and "send a message to big tech companies that bullying small businesses has consequences."

The company has launched a Change.org petition in an attempt to persuade Apple to "drop its opposition of the Prepear Logo, and help stop big tech companies from abusing their position of power by going after small businesses like ours who are already struggling due to the affects of Covid-19."

Prepear says that it is a "very small business" with only five team members, and explains that legal costs from the dispute have already cost thousands of dollars and the layoff of a team member.

"Apple has opposed the trademark application for our small business, Prepear, demanding that we change our obviously pear shaped logo, used to represent our brand in the recipe management and meal planning business... Most small businesses cannot afford the tens of thousands of dollars it would cost to fight Apple," the petition claims. "It is a very terrifying experience to be legally attacked by one of the largest companies in the world, even when we have clearly done nothing wrong, and we understand why most companies just give in and change their logos."

The petition has currently reached almost 9,000 signatures, and the founders hope it will reach 10,000.

Prepear says that Apple "has opposed dozens of other trademark applications filed by small businesses with fruit related logos," even in cases where the logo or industry is dissimilar to Apple's. Logos have been the source of legal action by Apple in the past, such as the case against a Norwegian political party and a German cycling path.

Update: Image from the trademark opposition paperwork filed by Apple:

Before all the youngsters enter. They need to do this to defend their own logo. Go read law.


I am by no means an expert in trademark law, though we did cover it in our university course so understand the basics (at least as far as the UK is concerned.)

To be clear, Apple DO NOT need to do this to protect their brand. The name is different, the logo is distinctly different, the purpose of the company is different. This logo and company in NO WAY harms Apple as a business, it is not connected to the same business sector as Apple and DOES NOT confuse customers to thinking there is a connection. It’s a disgrace for then to go after to such a small company on such a tenuous claim.

Apple do not own the rights to all fruit based names nor fruit based logos.
Score: 192 Votes (Like | Disagree)

Look up trademark law and the result of not defending this.

Apple (or any company in a similar situation) must do this to defend their mark.

What the heck are you talking about? No, that’s not how it works at all. That only works IF THE LOGO LOOKS REMOTELY SIMILAR.
Score: 125 Votes (Like | Disagree)

wilhoitm
It is clearly a Pear not an Apple!
Score: 92 Votes (Like | Disagree)

t76turbo
I like Apple but this is over the top. So many other targets they could have gone after that were ripping them off. They dont have a copyright on all images of fruit.
Score: 85 Votes (Like | Disagree)
Read All Comments