Apple recently objected to the logo of a new German cycling path in an appeal filed with the German Patent and Trademark Office, according to German outlets General-Anzeiger Bonn and Westdeutscher Rundfunk. 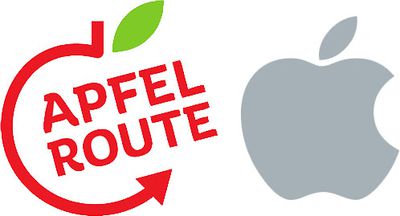 Apple reportedly takes issue with the logo's green leaf and supposed "bitten" right side, attributes the company believes are too similar to its own logo.

The logo, registered with the German Patent and Trademark Office in 2018, was designed for a new cycling path named Apfelroute that is set to open in the Rhine-Voreifel region of Germany on May 19. Rhine-Voreifel Tourism has already used the logo on uniforms, bike racks, cycling maps, banners, signposts, and more.

In addition to the appeal, lawyers representing Apple have reportedly sent letters to Rhine-Voreifel Tourism ordering them to stop using the logo, but the tourism agency believes it would be very expensive to do so.

"With the Apfelroute we have a completely different product and it is unbelievable that such a large company is attacking us," said one company official.

While it may sound unfair that a company as large as Apple is going after a small German tourist agency's cycling path logo, keep in mind that companies have an obligation to police and enforce their trademarks, as failure to do so could be viewed as abandonment, possibly resulting in the loss of trademark rights.

German reports suggest that Rhine-Voreifel Tourism narrowing the scope of the Apfelroute trademark will likely be enough for Apple to withdraw its opposition. If not, there is also the chance of an out-of-court settlement.

johnyslats
MacRumors, they’re coming for you next ;)
Score: 28 Votes (Like | Disagree)

sputnikv
The Macrumor's logo is really terrible btw. You should fix it.
Score: 16 Votes (Like | Disagree)

jsalda
Other than the leaf, no similarities.

Next they're gonna try and sue God for creating the apple in the shape of their logo.
Score: 10 Votes (Like | Disagree)

Doctor Q
Oops, I just rode my bike through 120km of fruit farms because I thought it was an Apple Inc. product.

The logo had me completely confused! :rolleyes:
Score: 8 Votes (Like | Disagree)

rjohnstone
Go home Apple... you're drunk.
No one would EVER confuse this with your products. :rolleyes:
Score: 6 Votes (Like | Disagree)
Read All Comments