Google today announced the launch of its latest smartphone, the Pixel 4a, which has a $349 price tag and is designed to compete with lower-cost devices like Apple's $399 iPhone SE. 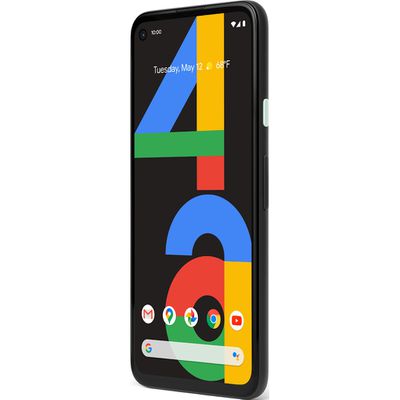 The Pixel 4a features a 5.81-inch display that's all screen, with a small front-facing pinhole camera at the top left, a square-shaped camera bump at the rear, and fingerprint biometrics on the back.

Design wise, the display is much larger than the ‌iPhone SE‌'s display, which is modeled after the 4.7-inch iPhone 8. The ‌iPhone SE‌ also features a fingerprint button, but it is at the front in a thick bottom bezel.

Apple is actually rumored to be working on a new version of the ‌iPhone SE‌ called the iPhone SE Plus that would have an all-display design similar to Apple's more expensive iPhones, with a fingerprint sensor built into the power button. The ‌iPhone SE‌ Plus won't be coming until 2021, though.

Along with an all-display design and a larger form factor, the Pixel 4a is equipped with an Octa-Core Qualcomm Snapdragon 730 processor and Titan M security chip, 6GB RAM, a single-lens 12.2-megapixel camera, 128GB storage, and a 3,140mAh battery.

The ‌iPhone SE‌ is equipped with a 12-megapixel camera too, but it's an older camera originally introduced in the ‌iPhone‌ 8, and it doesn't have Night Sight like Google's model. It does handily outperform the Snapdragon 730 processor with its A13 chip.

The Pixel 4a also has some Android goodies, such as the new Google Assistant experience that was first rolled out with the Pixel 4. Google promises three years of updates for the Pixel 4a, while the ‌iPhone SE‌ is likely to see four to five years of support.

We've got a Pixel 4a on the way and plan on doing an in-depth comparison with the ‌iPhone SE‌ later this week, so make sure to keep an eye out for that video. For those interested, the Pixel 4a can be pre-ordered from Google's website as of today.

AngerDanger
I’m not an Android user, but an all-screen device like this with a fingerprint sensor on the back for $50 less than the SE seems like a great option.
Score: 17 Votes (Like | Disagree)

LeeW
To be fair, if Android is your preference, here is a cheap stock Android device you can replace every two years at a cost of $175 per year, bargain in today's market.
Score: 17 Votes (Like | Disagree)

mattopotamus
More Nexus than a Nexus. If I wanted an android phone, it hands down would be the 4A.
Score: 12 Votes (Like | Disagree)

ghanwani
Google should just offer free phones every 24 months (just like they offer free search, free gmail, youtube, etc.) since they make so much money off the user's data.
Score: 10 Votes (Like | Disagree)

xxray
This is a really appealing value. It might be Google’s best-looking phone they’ve released too.
Score: 10 Votes (Like | Disagree)