Apple is exploring use of an accessory that would allow two iPads to connect together for notebook-style computing, according to a new patent filing uncovered by AppleInsider. 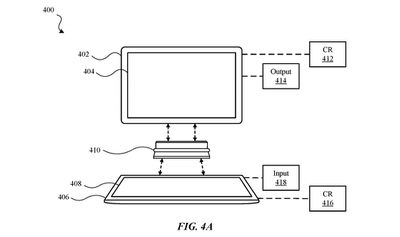 The patent application titled "Modular multiple display electronic devices," filed today with the U.S. Patent and Trademark Office, explains that when two iPads or iPhones are connected together via an accessory, one could be used as the display, and the other as a dynamic keyboard.

The envisioned coupling accessory consists of two small connectors and a hinge, with mobile devices attaching mechanically to either side. The connector would facilitate data transfers between the devices so that they could work in unison as one system.

Images included in the patent application mainly suggest that this accessory would allow for a notebook-style setup, with one device flat on a surface, with the hinged connector accessory at the back, propping up a second mobile device, in either portrait or landscape orientations.

Use of a second display for a dynamic keyboard would offer several unique solutions, such as allowing functionality to change based on a users' needs, much like the MacBook Pro Touch Bar. Depth and tactile feedback, the likes of which is only achieved by a physical keyboard, would likely be absent, however.

In addition to the notebook-style set up, the patent suggests that if two devices were attached along their longest edges, they could also be used in a book-style setup. This seems to be similar to the layout of the Microsoft Surface Duo.

Second-screen devices have been the subject of numerous Apple patents, such as the application "System with multiple electronic devices," which describes how two or more devices could act as one when brought close to each other through the use of proximity sensors. While Apple files numerous patent applications on a regular basis and many never materialize practically, they can often offer an intriguing insight into Apple's current areas of research and development.

Ubuntu
Complaint from many over the years: “we want multiple accounts for an iPad!”

boss.king
They'll really do anything to avoid selling a touchscreen laptop huh?
Score: 20 Votes (Like | Disagree)

citysnaps
For the last two years Apple was granted around 2,000 patents per year. This is just another that will likely not see realization.
Score: 8 Votes (Like | Disagree)

SkyRom
I actually love this idea, and look forward to testing it out with my workflow, but I can't help but think of this iPad meme from back in the day...

As much as I like using an iPad, typing is better on a keyboard. Also, iPad needs vibration, maybe then it can replicate a keyboard.

monarch757
WTF. I can't justify an iPad Pro 11 512GB cellular with the keyboard case and pencil 2 at $2K after taxes and applecare+. How can I justify two iPads?
Score: 7 Votes (Like | Disagree)
Read All Comments