In this week's App Recap, we've highlighted food and drink app "Soosee," productivity app "Tasks," and health and fitness app "Taurus" as three apps that are worth checking out. We've also compiled a list of apps that received major updates this week. 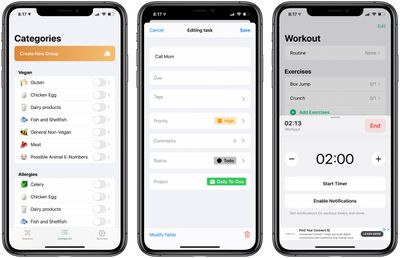 AniTha0917
I am using this app called Find. The full name of the app is Command F. It is a really great app. Check it out. I don't really know how to explain the app, but it is AMAZING. It is super simple to use and completely free!
Score: 2 Votes (Like | Disagree)

Friday August 12, 2022 12:46 pm PDT by Juli Clover
Samsung this week launched its fourth-generation foldable devices, the $1,000 Galaxy Z Flip and the $1,800 Galaxy Z Fold. Though there's no sign of a comparable Apple foldable device on the horizon, rumors suggest prototypes are in the works, so we thought we'd take a look at Samsung's newest smartphones to see what Apple needs to measure up to when a foldable iPhone does come out. Subscribe ...
Read Full Article • 262 comments