An antitrust hearing held by the U.S. House Judiciary Antitrust Subcommittee where Apple chief Tim Cook was set to join other big tech CEOs is likely to be postponed, according to a report on Thursday. 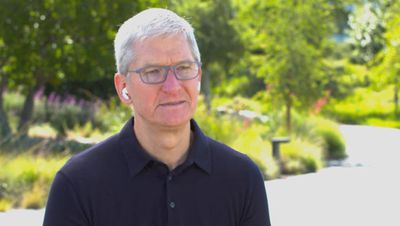 The hearing involving Cook, Amazon CEO Jeff Bezos, Alphabet/Google CEO Sundar Pichai, and Facebook CEO Mark Zuckerberg was supposed to happen next Monday, but two sources told CNBC that it was now unlikely to take place due to a conflict with the memorial service for the late representative John Lewis.

The hearing is meant to be the culmination of a more than year-long investigation into the four tech giants. After the hearing, lawmakers plan to publish a report based on their findings and propose legislation to bring antitrust laws up to date to deal with issues unique to digital marketplaces.

A recent report by The Information underlined Cook's initial reluctance to take part in the hearing, and how under the pressure of a potential subpoena, Cook ultimately agreed to participate.

Cook is said to have spent the better part of a month preparing for the hearing, which may touch on a wide range of subjects from App Store policies to Apple's disputes with the FBI over providing methods for law enforcement to access locked devices to Apple's relationships with China.

Update: The antitrust hearing with Apple CEO ‌Tim Cook‌ and other tech CEOs has been officially postponed. A new date has not been announced.

So much CEO time wasted for nothing.

They should rather thank Apple every morning for the huge marketplace they created, to the benefit of millions.

Antitrust laws are meant to promote competition that benefits the customer. This isn't about whether or not Apple is a monopoly, it's about Apple stifling competition on their platform.
Score: 5 Votes (Like | Disagree)

So much CEO time wasted for nothing.

They should rather thank Apple every morning for the huge marketplace they created, to the benefit of millions.

If it’s a monopoly or not is irrelevant.

The question is: is apple’s anti competitive behavior harming consumer?

Apple is acting anti competitively by not allowing other app stores in iOS, and forcing developers to use their payment system for 30% cut. Further more Apple has direct competing products to Netflix, Spotify, and others. That’s just a given.

Where the legal battle will be fought is whether or not consumers are better off using apple’s closed system, or if Apple is harming consumers through these practice (higher prices).

The outcomes could be huge. Either nothing will happen, or Apple will be fine, or Apple will be forced to open up iOS, or on a more extreme level Apple may have to spin up the App Store as a separate company.
Score: 3 Votes (Like | Disagree)

Crowbot
Why would a hearing on supposed anti-trust activities by Apple have anything to do with their inability to unlock their products for the FBI? Especially given that these people know nothing about the technical details.
Score: 2 Votes (Like | Disagree)

If it’s a monopoly or not is irrelevant.

The question is: is apple’s anti competitive behavior harming consumer?

Apple is acting anti competitively by not allowing other app stores in iOS, and forcing developers to use their payment system for 30% cut. Further more Apple has direct competing products to Netflix, Spotify, and others. That’s just a given.

Where the legal battle will be fought is whether or not consumers are better off using apple’s closed system, or if Apple is harming consumers through these practice (higher prices).

I disagree. I think the monopoly question is the only question the government can answer. I don't think the government really has anything to say about Apple's business model of the "walled garden" since there are alternatives that are a much larger proportion of the market. If Netflix, et al, want to play in Apple's garden they have to play by Apple's rules. Otherwise they'll have to be satisfied with the Android world.
Score: 2 Votes (Like | Disagree)

itsmilo
I always feel bad for those people having to actually prepare those numbers and slides you spent weeks working on, only to have the MD / CEO skipping over them. People like me ?
Score: 2 Votes (Like | Disagree)

djcerla
So much CEO time wasted for nothing.

They should rather thank Apple every morning for the huge marketplace they created, to the benefit of millions.
Score: 2 Votes (Like | Disagree)
Read All Comments