According to leaks, Apple's upcoming iPhone 12 models could ship with a new Lightning to USB-C cable that includes a braided fabric design, and today serial leaker L0vetodream has shared more images of the purported new design, alongside a similar cable in black. 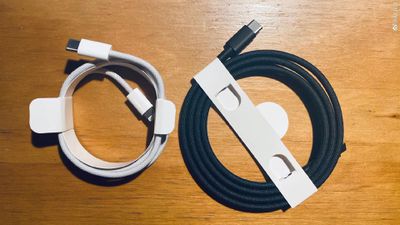 Braided cable designs have the potential to be more durable than standard rubber-coated cables, but typically extra reinforcement is included at the end points where the cable heads are positioned, which isn't seen here on the white cable. The cables look similar to existing Apple-designed Lightning to USB-C cables with the exception of the new gray and white braided look on the white.

Apple in 2019 included a USB-C to Lightning cable with the higher-end Pro iPhone models to go along with a USB-C power adapter, while the more affordable ‌iPhone‌ 11 came with a standard USB-A to Lightning cable. That's led to speculation that the braided cables could be exclusive to the higher end ‌iPhone 12‌ models.

Apple's new braided USB-C to Lightning cable may be the only accessory that ships with its 2020 iPhones. Multiple rumors have suggested the ‌‌iPhone 12‌‌ models will not come with a power adapter or EarPods in the box, allowing Apple to save money and cut down on packaging.

Instead, Apple may sell a new 20W power adapter on a standalone basis. This would allow customers to purchase a power adapter separately from Apple or from a third-party manufacturer, and could bring Apple in line with EU proposals for a common charging standard.

Why on Earth would one have a cable protector and the other colour wouldn’t?

Stuey3D
Why USB-C to lightning though? If they are getting rid of power adapters in the box because everybody already supposedly has one then surely it needs to be a USB-A on the other end as I imagine very few people already have a USB-C power adapter or even a laptop with USB-C, yet most will have access to USB-A power adapters.

This stinks of a nickel and dime move, dropping the power brick “to prevent e-waste and be environmentally friendly” yet causing a crap ton more e-waste when people are forced to ditch their current USB-A adapters. Apple is clearly hoping that they will either sell you a USB-C power adapter or a USB-A to lightning Cable at the same time as buying the phone meaning more ££ for Apple.
Score: 13 Votes (Like | Disagree)

Yeah remove the adapter for sure, but keep a USB-A cable in the box or put an adapter so that the USB-C cable can be used with the multitude of USB-A ports most households have access to. Then when more people have access to USB-C ports like they do with USB-A ports then change the connector. They did this when they removed the headphone port they gave a little dongle so that people could still use their existing headphones, and when wireless headphones became more mainstream and cheaper to buy they ditched the dongle. They may do that again by including a USB-A Male - USB-C female in the box so you can stick that on the new cable to work with older chargers but I doubt it.

Right now removing the adapter and changing the default charger connector stinks of greed And an attempt to get you to buy overpriced Apple cables and chargers when you have just dropped a huge amount on the phone.

USB-A needs to die, full stop. Lightning does too, but I'd rather have 1 legacy cable end than 2.
Score: 6 Votes (Like | Disagree)

Well no. I don’t know why people don’t get this. Give it more than just 5 seconds of thought.

If you are a person who would like a new fast charging adapter or switching to iPhone, you get the latest cable standard in the box.

This gets USB-C cables into people hands, making us slowly able to move away from USB-A.

In fact my mother in law is prime example she has just upgraded to an SE from an iPhone 4S so she didn’t have a lightning cable to begin with but she had a USB-A charger. Now if the SE came without a power brick and with only a USB-C to Lightning then she would be having to pay extra for an accessory that should be in the damned box. She could have used her existing adapter so removing that from the box is no big deal, but changing the cable as well is just greed.
Score: 5 Votes (Like | Disagree)

groove-agent
I’m not buying aniPhone until it goes USB-C. My MBP, and iPad Pro have it so why not my phone.

The dream is to not to have a million cables and adapters in my laptop bag. I really do hate it.
Score: 4 Votes (Like | Disagree)

baryon
So wait... it's USB-C... meaning that the vast majority of people won't be able to plug it into any of the 50 chargers they already own, and will have to go and BUY yet another one just to charge it? Well played, Apple, well played! Consumerism yay!
Score: 4 Votes (Like | Disagree)
Read All Comments