Apple says it has found no evidence of alleged forced labor at one of its key Chinese suppliers, after the U.S. government blacklisted O-film as part of its continuing crackdown on Chinese tech companies. 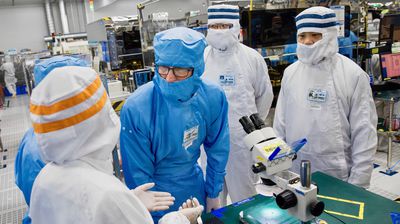 Tim Cook on a visit to a Chinese O-film facility in 2017
Camera and touch module supplier O-film Group was one of 11 Chinese companies added to the U.S. Commerce Department's Entity List on Monday over alleged human rights abuses involving China's Uighur Muslim minority. Activists have also launched a campaign accusing firms of "bolstering and benefiting" from exploitation of the minority group.

Reports by U.S. Congress and the Australian Strategic Policy Institute (ASPI), among others, have found that thousands of Uighers have been transferred to work in factories across China under conditions that strongly suggest forced labor. The ASPI has inked the factories to over 80 brands, including Apple, Nike, and Gap.

However, Apple told BBC News on Thursday that it had investigated the claims against O-film and had not discovered anything untoward, despite conducting several surprise audits at O-film facilities.

"We have found no evidence of any forced labour on Apple production lines and we plan to continue monitoring," the firm said.

O-film has been part of Apple's supply chain since 2017, first for iPads and later for iPhones. O-Film currently supplies front-end camera modules and dual-camera modules for Apple's upcoming "iPhone 12" lineup.

The manufacturer has successfully competed for Apple's business by showing that it can meet the company's high quality standards, fending off rival camera module suppliers including Foxconn-owned Sharp of Japan and LG Innotek.

In December 2017, Apple CEO ‌Tim Cook‌ visited one of O-film's factories and praised the tech expertise and work culture, according to a press release on O-film's official website.

Update: According to DigiTimes' sources in the supply chain, O-film's shipments for Apple will not be affected by the blacklisting in the short term. The sources said O-film's Nanchang site supplies touch control solutions for Android handsets and has become an independent business entity since 2019, while O-film's camera modules for iPhones are mainly assembled at its main production base in China's Shenzhen.

Absolutely disgusting that Apple isn’t doing all it can to rapidly move out of China, with this sort of stuff going on. Harks right back to Nazi Germany...

Apple is prepared to stand up for most forms of social justice causes, but conveniently ignores this sort of disgusting human rights abuse.
Score: 17 Votes (Like | Disagree)

Greenmeenie
No evidence? ? Um... Okay Tim. Keep living in your dream world. It’s amazing how blind these CEOs can be when it comes to China. Apple is the richest company in the world yet they still bow to China. it’s all about money. Sad.
Score: 15 Votes (Like | Disagree)

phalseHUD
No I don’t. I’m just an ordinary bloke with an ordinary job calling out what I see. Trade with a Country this vile, surely can’t continue.

As I said, if Apple can stand up for various social justice causes, surely they can divert some or even all of THEIR talent in this regard, to moving out of China as quickly as they can.

Do you have any ideas for a plan to move out of China, or do you think they shouldn’t bother?
Score: 14 Votes (Like | Disagree)

swingerofbirch
If you're a Uighur and are under forced labor, you would probably make every attempt to make things look on the up and up for inspectors. What could Apple possibly do for you if you revealed the forced labor? Is Apple going to go toe-to-toe with the PRC to ensure you wellbeing? No, you would be returned to interment camps under worse conditions. Who knows what threats their families are under. This is state policy not individual corporate lapses in ethics, so I'm not sure why any company thinks they can take this on. Even you only do business with companies in China that don't have forced labor of Uighurs, are the Uighurs any better off? It sounds to me like China is trying to integrate them into the workforce to some extent and out of the interment camps. Saying you won't work with Uighur forced labor but are OK with other companies in China as long as the Uighur are in internment camps seems odd. Probably better not to do business with China.
Score: 12 Votes (Like | Disagree)

If you're a Uighur and are under forced labor, you would probably make every attempt to make things look on the up and up for inspectors.

Apple faces a similar issue with underage workers in China. They're typically one it two years too young and they want the job so they provide fake ID and use bribes.

Apple's inspectors are still able to catch it. Ask for proof and verify the proof hasn't been forged.

What could Apple possibly do for you if you revealed the forced labor?

It would be a breach of contract - which means Apple can cut ties with the company and not pay for whatever they manufactured - while also not allowing them to sell the goods to anyone else either (because it's all proprietary).

For nearly all components Apple has more than one supplier - which means they can drop them without any serious disruptions.

Given Tim Cook's track record on issues like this, I'm going to assume he's telling the truth. It's either very well hidden or they're not doing this at Apple factories where they know they will be subjected to close scrutiny.
Score: 10 Votes (Like | Disagree)