Christian Selig, developer of popular Reddit app Apollo, is today hosting a fundraiser that will see all Apollo in-app purchase proceeds from today donated to his local SPCA animal shelter. 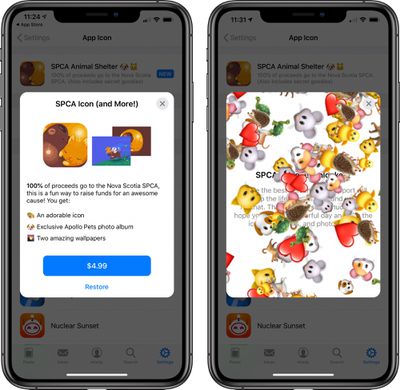 Selig hosts a similar fundraiser each year, and last year, was able to raise $27,000 to help shelter animals in Nova Scotia, marking the largest donation the SPCA had ever received.

Apollo is a free Reddit app that can be used in a read only kind of capacity at no cost, but it offers "tip" options at $3.99, $6.99, or $9.99 to unlock Apollo Pro features like post submissions, multiple account support, auto dark mode, gesture customization, filtering, live comment updating, custom color themes, and more.


There's also an extra Apollo Ultra tier for $0.99 per month, $9.99 per year, or $24.99 for a lifetime unlock that provides realtime notifications, app theming, and a custom app icon every month. All Apollo proceeds from in-app upgrades will be donated today.

To celebrate the fundraiser and encourage donations, Selig has also released a new pet-themed SPCA Home Screen icon option created by artist David Lanham, which can be set as the icon on the iPhone or iPad's ‌Home Screen‌. The icon is an extra $4.99 purchase that also includes an Apollo Pets photo album and wallpapers.

Today 100% of Apollo's proceeds will be donated to the Nova Scotia SPCA Animal Shelter who are really in need of the help and is strained on resources. Check out an awesome Reddit app today! I'll also donate $1 for every retweet this gets! https://t.co/oMlPqOAPOt — Apollo App (@apolloreddit) July 20, 2020

Customers who have already upgraded to Apollo Pro or Ultra can purchase the extra icon package to donate to the SPCA.

Apollo for Reddit can be downloaded from the iOS App Store for free. [Direct Link]

What a generous donation to Apple. Or did he somehow get Apple to agree to give their 30% cut to the SPCA Animal Shelter as well?

There's always that guy that can find the negative in something that is nothing but positive.
Score: 12 Votes (Like | Disagree)

Christian is one of those developers that I love supporting. Embodies so much of what makes the App Store great. He's the Loren Brichter of our time. Independent, reads all user feedback and builds features people want, improvements month over month, huge beta program and twice a year does some fund raiser for charity.

Okay I literally emailed Loren Brichter for tips when I was in high school and wanted to get into app development so this comparison might actually make me cry and I'm nowhere near that yet, but I want to be. Thank you so much.

I took up this deal last year and got both Pro and Ultra. Had it for a year and enjoyed it. It was renewed today so I guess I am going for a donation this time.

Haha! I didn't even think that if I do this every year the renewal will get donated as well, that's so awesome.

Christian is a good developer. I can’t wait until the Apollo app comes to the Macbook thanks to Apple Silicon in the near future! ?

My goal is for it to be a lot more than just the iPhone version running on Apple Silicon. I have an Apple Silicon Developer Transition Kit sitting beside me and hope to have a very nice Mac app. :)

After years and years of loving every second on narwhal, it has fallen behind in features and keeping up with modern interface design language. Switched to Apollo about a month ago and WOW I was holding myself back, this app is so well made and the dev has obviously put a lot of care and attention to it. I will never switch back!

Just like a lot of the things apple makes, they may not have done it first but they def did it right.

So awesome to have you aboard! For what it's worth I think the Narwhal developer does this in his spare time, I'm quite fortunate to be able to do it full time so it's probably a lot trickier for him doing it beside a full time job. But I heard he's working on Narwhal 2! But regardless I'm really happy you like Apollo!

What a generous donation to Apple. Or did he somehow get Apple to agree to give their 30% cut to the SPCA Animal Shelter as well?

I totally see where you're coming from, but the 30% is a small price to pay given that there's no way to do this kind of event otherwise. And in Apple's defense, it would be quite an undertaking to develop some kind of system where developers could give to charities on certain days, because otherwise if the devs didn't post proof like I did, they could just run off with the money. Don't get me wrong, I absolutely think they should, but it's probably not easy.

Of course this would pop up when Apple has my iPhone for repair. :(

Tell you what, if you can't figure out how to do it, just donate the same price of whatever you were going to unlock directly to the SPCA here https://www.canadahelps.org/en/pages/apollo-app-2020-spca-fundraiser/ then just DM me on Twitter (@ChristianSelig) with a picture and I'll generate a promo code for that for you to use whenever you want. We're not supposed to "sell" promo codes on the side, but I don't think this qualifies because I'm not making any money off it.
Score: 10 Votes (Like | Disagree)

adamjackson
Christian is one of those developers that I love supporting. Embodies so much of what makes the App Store great. He's the Loren Brichter of our time. Independent, reads all user feedback and builds features people want, improvements month over month, huge beta program and twice a year does some fund raiser for charity.
Score: 10 Votes (Like | Disagree)

Hal~9000
Christian is a good developer. I can’t wait until the Apollo app comes to the Macbook thanks to Apple Silicon in the near future! ?
Score: 6 Votes (Like | Disagree)

Why would you get a neutered read-only reddit app, or a paid for full reddit app, when you can have the full thing for free on your web browser???

Because Reddit on the web sucks, and I am willing to pay for nice things so as to encourage not developers to create apps for the ios platform.
Score: 5 Votes (Like | Disagree)

Just wanted to update all you beautiful people and say thank you so much, because of your generosity we managed to raise $42,749.29 for the SPCA!!!
Score: 4 Votes (Like | Disagree)
Read All Comments