Apple is exploring new Apple Pencil technology that could allow the device to sample colors from the real world to use in digital art, drawings, edits, and more, according to an Apple patent application published by the United States Patent and Trademark Office this week. 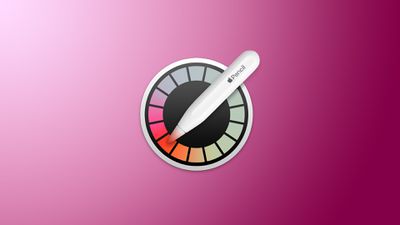 Titled "Computer System With Color Sampling Stylus," the patent describes a computer stylus that "may have a color sensor."

The color sensor would be equipped with several photodetectors able to measure light for different color channels, which would let it detect and sample a color from a real world object, like a flower.

The stylus could also be equipped with a light to make it easier for the photodetectors to accurately determine a color, and the rest of the patent describes an Apple Pencil-like design with an elongated body, a tip, and an opposing end, with the tip able to work with a touch-sensitive display.

Apple says the color sensor functionality could be located at the end of the stylus, at the tip, or coupled to the tip through a light guide.

With this kind of technology, ‌Apple Pencil‌ users would be able to do something like hold the ‌Apple Pencil‌ against an object in the real world, with the ‌Apple Pencil‌ reading the color. It could be used for photorealistic paintings or just sampling of unique colors from grass, plants, existing art, and so much more.

According to the patent, the stylus would detect the color and then put it in a color palette in a drawing program, where the color could be assigned to a brush. Apple also suggests that color sensor could perhaps be used for other purposes such as calibrating displays, calibrating printers, making health-related measurements, and identifying paint colors for home projects, which would make the ‌Apple Pencil‌ even more versatile.

Optical color sensors like this already exist and have been used in various ways. In fact, we've tested a simple, rudimentary optical color sensor in the Sphero Specdrums, a product meant to turn color into sound. This product includes a little finger ring that can be tapped against real world objects to make sounds based on the color it senses, but Apple's implementation would presumably be much more precise.

Apple patents all kinds of different technologies, some of which seem plausible to implement and others that are quite fantastical. There's never any guarantee that Apple's patents will be used for real products, and in fact, most patents are for technologies that never get released.

For that reason, there's no word on whether Apple actually plans to add a color sensor to the ‌Apple Pencil‌, or if this is simply an idea that's never going to make it out of the possibilities phase.

I can do you one better, mate…

Doctor Q
This feature could be especially helpful for color blind users like me. Since I can't identify most colors visually, I do a lot sampling/copying/pasting of colors, or looking them up and specifying them by their RGB values. Being able to grab a color and digitize it physically would be super useful.
Score: 18 Votes (Like | Disagree)
Read All Comments