Apple is now offering the popular Brydge line of keyboards designed for the newest iPads in retail and online stores across the United Kingdom. 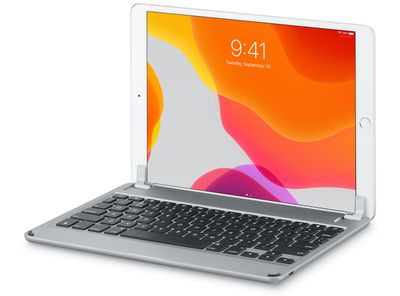 Starting at £99.95, the Brydge keyboards are more affordable than Apple's own Smart Keyboards and offer a more traditional typing experience with 1.2mm of key travel.

The ‌‌iPad‌‌ nestles into two silicone-lined tabs at the top of the keyboard, with no additional cover required for the rest of the ‌‌iPad‌‌, which keeps the design more minimal. The tabs are hinged, so the keyboard can be closed over the ‌‌iPad‌‌ in a clamshell design.

Brydge keyboards aren't able to take advantage of the Smart Connector on Apple's iPads and instead must use Bluetooth, but Brydge says they're able to last for up to 12 months on a single charge depending on usage. There are integrated iOS battery management tools to cut down on power drain.

The keys are backlit, there's a row of function keys specific to iOS, and the keyboards use Bluetooth 4.0 to connect to the ‌‌iPad‌‌. Each keyboard is made from a heavy, durable aluminum that's able to hold up to wear and tear, and it's simple to remove the ‌‌iPad‌‌ from the tabs that hold it in place.

The Brydge keyboards are available in all Apple Stores across the U.K., Apple's regional U.K. online store, and Brydge's UK website starting today. The keyboards debuted at Apple Stores in the U.S. and Canada last year.

and 1989 others
It looks like something Mary Shelley would write about. Awful design.
Score: 1 Votes (Like | Disagree)

notabadname
I had one. The only thing it had going for it was backlighting. Otherwise heavy and the need to charge it separately made it frustrating. After having Apple’s magic keyboard for a couple of months, I know there is no better (perhaps far cheaper - but no better). I love never charging my keyboard, and I love the backlit keys.
Score: 1 Votes (Like | Disagree)
Read All Comments