Later this year, Apple is expected to release four OLED iPhones in three display sizes, including 5.4, 6.7, and two 6.1-inch models. Rumors suggest the 6.7-inch iPhone and one 6.1-inch model will be higher-end devices, and now leaker @L0vetodream has corroborated previous rumors about the internal specs of Apple's upcoming lineup. 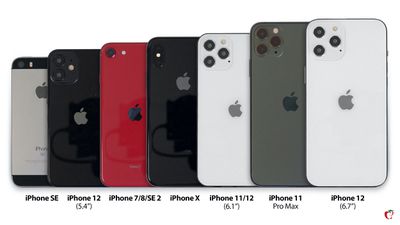 Rumors suggest Apple will use 5-nanometer A14 chips in its 2020 ‌iPhone‌ lineup that will be smaller, faster, and more battery efficient due to improved thermal management. And to accommodate these improvements, @L0vetodream claims the Pro models will feature 6GB of RAM, while the mid-level models will retain the same 4GB of RAM that all iPhone 11 models have.

The anonymously-run Twitter account @L0vetodream accurately revealed several details about the new ‌iPhone SE‌ before any other leakers that we know of, including that the device would launch in the second week of April and come in three storage capacities. Likewise, the account accurately claimed that new iPad Pro models would launch in the third week of March. It has also hinted at a 2021 release for a rumored 14-inch MacBook Pro.
Tag: L0vetodream
Related Forum: iPhone
[ 68 comments ]

2GB RAM on 6s/7/8 is still more than enough for most iPhone users these days.

Yeah, it's not. Unless you want all your apps closed after launching camera.app.
Score: 36 Votes (Like | Disagree)

fokmik
nobody would expect this....thank god we had this leaker guy
Score: 7 Votes (Like | Disagree)

Wake me up when non volatile storage is as fast as RAM, SSD's already make a difference, VM was slow on mechanical HDD, it got much better on SSD's, now I wish we wouldn't need RAM at all if Storage was indeed as fast as RAM.

For example, the iOS kernel has no swap pager on purpose, because paging out memory would wear out the NAND much quicker than users would tolerate.
That’s one reason why RAM ain’t going away anytime soon.
Score: 7 Votes (Like | Disagree)

MacFather
2GB RAM on 6s/7/8 is still more than enough for most iPhone users these days.
Score: 5 Votes (Like | Disagree)

justperry
Wake me up when non volatile storage is as fast as RAM, SSD's already make a difference, VM was slow on mechanical HDD, it got much better on SSD's, now I wish we wouldn't need RAM at all if Storage was indeed as fast as RAM.


2GB RAM on 6s/7/8 is still more than enough for most iPhone users these days.

You can easily see how an iPhone gets slowed down by limited RAM, Updates are much faster if there's sufficient RAM, close all your Apps, next restart and Update let's say 20 Apps, compare that to lots of open Apps and Updating, it is considerably slower.
Score: 5 Votes (Like | Disagree)

waiting for them to get rid of that ugly notch.if there is no notch then I’m on it for the upgrade

Yet you’re “happy“ with the ugly notch on your iPhone 11 Pro Max? ?
Score: 5 Votes (Like | Disagree)
Read All Comments