Popular Mac accessory maker OWC today announced the launch of its ThunderBay Flex 8 tower for media professionals, offering eight drive bays, a handful of ports for connecting peripherals, and a PCIe slot for expansion capabilities, all connected to your Mac over Thunderbolt 3. 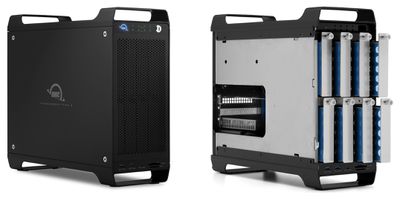 The ThunderBay Flex 8 resembles a black version of the Power Mac G5 and original Mac Pro design, and it opens up to reveal eight SATA/SAS drive bays capable of accepting both 3.5-inch and 2.5-inch drives, with the top four bays also able to accept U.2/M.2 NVMe drives. There's also a PCIe x16 connector/x4 lane slot for adding cards such as audio/video capture or additional SSD storage.

Near the bottom of the front of the ThunderBay Flex 8 is a string of ports for connecting peripherals, including a pair of 10Gb/s USB-A ports, a 10Gb/s USB-C port, and CFexpress and SD 4.0 card readers. On the rear of the tower are a pair of Thunderbolt 3 ports (one upstream and one 15W downstream) and a DisplayPort 1.4 port.

Pricing on the ThunderBay Flex 8 starts at $1,299 for just the enclosure, or it can be ordered with various combinations of drive types and capacities that can push a maxed-out configuration to nearly $8,000.

madmin
They missed a trick by not having optional wheels !
Score: 7 Votes (Like | Disagree)

Darth Tulhu
This design makes me sad for what could have been.

A black Mac Pro like this would've been AWESOME, instead of the silly tube we got in 2013.

I'd take that over the new MP design any day.
Score: 6 Votes (Like | Disagree)

I'm seeing a lot of Thunderbolt peripherals out lately, but ARM Macs are coming which probably won't support Thunderbolt since it's an Intel chipset technology.

I believe Intel released Thunderbolt to the masses for inclusion into the USB4 specification. There are many references to that effect via google search. But it is also entirely possible for Apple to release an ARM Mac with an Intel chipset dedicated to Thunderbolt 3 like it does today (with an Intel JHL7540 Thunderbolt 3 controller, source iFixit) though it could make sense to simply release the first ARM Mac with USB4 and ensure compatibility with Thunderbolt 3 through that.

Apple isn't throwing all Intel chips out of the ecosystem just yet unless they've got alternate implementations of functionality currently provided by Intel outside of the main processor (and embedded gpu).
Score: 4 Votes (Like | Disagree)

PlainviewX
That thing is a beast.
Score: 4 Votes (Like | Disagree)
Read All Comments