With just two months to go until the usual timeframe for Apple's iPhone launch events, Apple is cutting back on maximum trade-in values of previous-generation iPhones for those looking to upgrade to a new model. 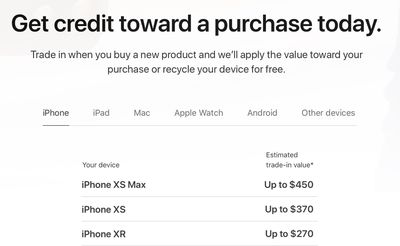 nburwell
These prices are a joke. You're better off just privately selling your phone to get more money. But I suppose for those who don't want to deal with the hassle of selling their devices privately, trading in to Apple is the easier route to take.
Score: 16 Votes (Like | Disagree)

Why anybody would trade them in is beyond me

Convenience, eBay fees, PayPal fees, potential for fraudulent buyer ripping you off, etc. Yeah you’ll usually make some more selling it on your own but for a lot of people it’s not worth the hassle.
Score: 13 Votes (Like | Disagree)

Unless there is Touch ID under the screen, I'm waiting another year in the current COVID environment.

And of course you'd similarly demand that Touch ID screen work with gloves and with undiminished security? Right?
Score: 10 Votes (Like | Disagree)

You’re using “face” in caps, yet you’re hiding half of your face and still expect it to work? If you don’t care about having a safe authentication I recommend just disable all security on your phone.
Score: 8 Votes (Like | Disagree)

ouimetnick
Best bet is to sell privately. No different than the hit you’d take if you trade your vehicle in at a dealership rather than selling it yourself.
Score: 7 Votes (Like | Disagree)

mattopotamus
This was the exact reason I went ahead and pulled the trigger on the 2020 SE. I figured my X would lose value and what I get for the 2020 SE when the 5.4" 12 launches will be the same (prefer smallest form factor).

Why anybody would trade them in is beyond me, you get more on eBay for a used iPhone.

Hassle free. The second hand market is nothing like it was 4-5 years ago. You can probably get $100 more going eBay or craigslist (not including the XS max), but that isn't worth it to me personally.
Score: 5 Votes (Like | Disagree)
Read All Comments