iPhone 12 dummy models based on leaked schematics have been starting to circulate online and in online marketplaces.

Not happy with the circulating size comparisons between the rumored 5.4" iPhone 12 and the original iPhone SE models, MacRumors forum user iZac took matters into his own hands and purchased his own 5.4" dummy model to provide more detailed size comparisons between the original iPhone SE and iPhone 7 and the rumored 5.4" iPhone 12. 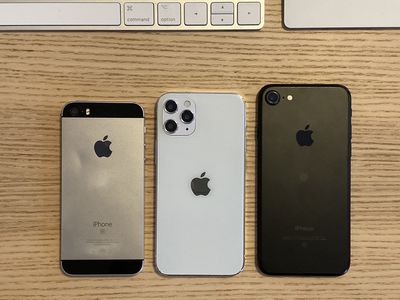 iZac and others in the thread are looking towards the 5.4" iPhone 12 as potentially replacing their original iPhone SE (4-inch screen) as a one-handed device. Overall, he feels that he can get used to the small size difference with the upcoming device:

From handling it I can say it does feel like a bit more of a stretch than the SE, which just nestles very comfortably in my hand. BUT, although it’s nearer to the 7, I will note that it feels a lot more manageable because the square profile and flat side lets you actually grip the device.

iZac found that the rumored 5.4" iPhone is about 6mm wider than the original iPhone SE and about 3mm narrower than the iPhone 7:

iZac also approximates the upcoming 5.4" iPhone 12 to be approximately 1mm thicker than the SE.

iZac posted some additional photos and comments in the original forum thread.

yellow8
This should please a lot of people!! Me included.
Score: 51 Votes (Like | Disagree)

Here you go, if I’d have known this was going to be put on the front page, I’d have put a little more effort into it! my apologies I can’t be more accurate. I was using this iPhone 11 Pro to take the previous pictures, so these images below are being taken with a *cough* iPad *cough*

I should mention again that these straight-on pics are deceptive because the round profile on modern iPhones are quite slimming.

allenvanhellen
Might still be too big, but this is a step in the right direction. The perfect iPhone will be about the size of the 4S but all screen.
Score: 29 Votes (Like | Disagree)

YoitsTmac
I own an iPhone X and am paying close attention to this 5.4" iPhone 12. I am JUST barely incapable of comfortably hitting the other side of the screen with one hand. Didn't have this issue with my iPhone 6S, so seeing this is really promising to me
Score: 18 Votes (Like | Disagree)
Read All Comments

Sunday July 3, 2022 8:07 pm PDT by Sami Fathi
While past rumors have indicated the upcoming second-generation AirPods Pro will feature a built-in heart rate and body temperature sensor, Bloomberg's Mark Gurman has cast doubt on those rumors turning out to be true, saying instead such a feature is unlikely to come anytime soon. "Over the past few months, there have been rumors about this year's model gaining the ability to determine a...
Read Full Article • 69 comments

Monday July 4, 2022 5:50 am PDT by Hartley Charlton
Apple is working on an Apple Watch Series 8 model with a larger display, according to DSCC's Ross Young and Haitong International Securities's Jeff Pu. In October last year, Young suggested that the Apple Watch Series 8 could come in three display sizes. Now, responding to a query about the rumor on Twitter, Young claims that the additional display size joining the Apple Watch lineup will be ...
Read Full Article • 165 comments