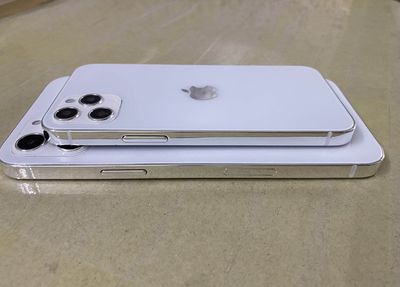 Images of iPhone dummy units usually appear every year, just a few months ahead of Apple's usual September-October launch timeframe. They are usually based on CAD schematics sourced from the Chinese supply chain, much like the molds leaked last week. Such dummies are often used to aid case-makers before the official reveal.

The images mostly conform with details we already know, with the device sporting an iPad Pro-style design with flat edges. Apple is expected to launch four iPhones this year, across three sizes of 5.4, 6.1, and 6.7 inches. Dickson's images give a clear comparison of the three new sizes.

Dickson cautions that the notch and camera layouts in these images should not be heavily relied upon. The are believed to offer clear depictions of what the upcoming chassis design may look like across the various new sizes.

Dickson has been known to leak dummy models in the past, such as of the 2020 iPad Pro refresh. He most recently suggested that WWDC will see the announcement of a new iMac with ‌iPad Pro‌ design language and thinner bezels.

cmaier
The iphone 4 was a nice look. This with the midnight blue should be very popular.
Score: 14 Votes (Like | Disagree)

GeoStructural
If they do not add the LiDAR sensor I see less of a reason to upgrade. 5G is not a selling point for most people, Promotion, another touted new feature is virtually unknown to users outside of the tech community.

The only thing I see going for it here is the boxy 4-esque design we have been wishing for years and the size options.

Those phones look dated. Curved edges for the win.

I have never understood the fascination with curved edges, I disliked them so much! at least Apple did not take it to the extreme as some Samsung devices that were absurdly curved.

That looks really bad - and also too thick.

Too thick? I would make them even 1 mm thicker if that meant more battery life and less of a camera bump. Bring them thic iPhones!
Score: 9 Votes (Like | Disagree)

What happened to all the complaints about thinness and battery life?

LOL - you haven’t figured out that in the macrumors forums whatever Apple does is wrong?

And now that Jonny is gone, every design decision is Mr. Cook’s fault (or, as they call him here, “Timmy?”)
Score: 8 Votes (Like | Disagree)

so it’s an iPhone X with flat sides and a stovetop camera setup with a centered Apple logo... looks good, but with the X running as good as it does still... not seeing much reason to upgrade

Yeah, hard to see the point in upgrading to a phone which, since it hasn’t been announced yet, we know nothing about other than its shape.