Subscribe to the MacRumors YouTube channel for more videos.
We went hands-on with watchOS 7 in our latest YouTube video to give MacRumors readers a preview of what's coming when the update launches later this year.

Apple still isn't allowing custom watch faces, but it did add more flexibility in watchOS 7. Multiple complications from a single app can be used on your watch face, so if you wanted to do something like set up a surfing themed watch face with info on swells, water temperature, and more all taken from one app, you can do so. 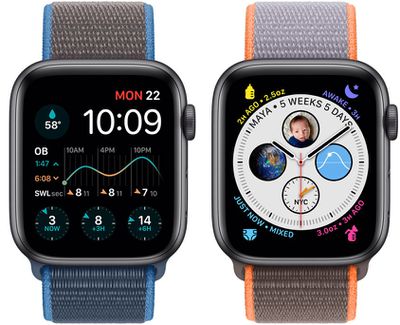 There are several Apple-created complications to add to the Apple Watch in watchOS 7 for accessing Shortcuts, the Camera Remote app, Moon phases, Sleep Tracking, and the World Clock.

There's also a new feature that allows for watch face sharing, so you can create useful watch faces and share them with friends and family over apps like Mail and Messages, or with a broader audience on the web. Apple also plans to highlight useful watch faces in the App Store.

Apple added a new Chronograph Pro watch face with a tachymeter, plus tweaked a few others. The Photos face supports color filters and the X-Large face works with complications.

Sleep Tracking lets the Apple Watch be worn at night to track how much sleep you're getting, with sleep habits over time visible in the Health app on the iPhone. The Apple Watch's sleep tracking doesn't provide detailed data on metrics like deep sleep or light sleep, but it does come alongside Sleep Mode, Wind Down, and alarm features to maximize how much sleep you're getting.

Sleep Mode turns the Apple Watch's display off and activates Do Not Disturb while you're asleep, and it can be set to come on automatically based on the sleep schedule programmed into the watch. Wind Down works with your own pre-bedtime preferences and can do things like suggest that you open a meditation app or turn down the lights as you get ready to sleep. In the morning, the Apple Watch can wake you up with a haptic alarm, greeting you in the morning with a weather report.

To make sure you have enough battery, the Apple Watch provides notifications when it needs to be charged above 30 percent before bedtime, and if you're charging in the morning while you get ready for the day, you'll see an alert on your phone letting you know when the Apple Watch has a full charge.

Sleep tracking battery drain isn't too bad, and in our experience it drained about 30 percent throughout the night, something that Apple may be able to improve over the beta testing period.

Along with sleep tracking, Apple introduced a new handwashing monitoring feature that helps people wash their hands for the recommended 20 second duration. When the Apple Watch detects handwashing motions and the sound of running water, it starts up a 20 second countdown.

iOS 14 features like cycling directions for bike riders and EV routes for electric vehicle owners have been added, Siri can offer spoken translations, ‌Siri‌ requests are now faster with on-device dictation, and there are new hearing health features to better protect your hearing when listening to music.

watchOS 7 is limited to developers at the current time, but Apple plans to release a watchOS 7 beta for public beta testers for the first time. watchOS software can't be downgraded, so when the public beta software releases, beta testers will still want to use caution before installing.

After a few months of beta testing to work out bugs and streamline new features, watchOS 7 will see a public release this fall alongside iOS 14.

WatchOS 7 was the most disappointing part of the keynote because it’s such an immature OS compared to iOS or macOS, but they added nothing I’d even consider using. No custom/third party watch faces, no iPhone independence, nothing even marginally interesting. Just more “features” that nag you like the parents of a disobedient toddler.

If that's the way you feel, you should definitely wash your hands of this version.
Score: 12 Votes (Like | Disagree)

Exactly this. I don’t need my watch to tell me I haven’t had enough sleep!

the more data the better.

a few years ago, i noticed that my resting heart rate overnight had shot up. it avg'ed 55 bpm, but one night it was in the 70s. next day i came down with the flu.

my watch knew my body was fighting an infection before i felt it.

now i realize there's not much i could actually do with that data, but after that, my POV is the more data the merrier. it's interesting to look at sleep patterns based on various variables. dinner after 8pm? less sleep. alcohol in the evening? fall asleep sooner but woke up often throughout the night. determine how my sleep is impacted by exercise in the AM or PM. or the biggest for me was realizing that my go-to sleep aid had zero affect on my amount of sleep, even if it helped me fall asleep faster.
Score: 12 Votes (Like | Disagree)

pauloregan
What do people do with sleep tracking data?
Score: 10 Votes (Like | Disagree)

QCassidy352
WatchOS 7 was the most disappointing part of the keynote because it’s such an immature OS compared to iOS or macOS, but they added nothing I’d even consider using. No custom/third party watch faces, no iPhone independence, nothing even marginally interesting. Just more “features” that nag you like the parents of a disobedient toddler.
Score: 9 Votes (Like | Disagree)

HiVolt
Why can't they just allow custom faces... allow devs to make custom faces. Approve them just the same way as you do apps, so there's no blatant copyright infringement of brand names.

Watch Face sharing seems so utterly stupid as an idea. They're grasping at straws, literally. The "new" faces they keep introducing are ridiculous for most people.
Score: 5 Votes (Like | Disagree)
Read All Comments