We at Acidanthera are a small group of enthusiasts who are passionate about Apple ecosystem and spend time developing software to improve macOS compatibility with different kinds of hardware including older Apple-made computers and virtual machines. For us, who do this on entirely volunteer and uncommercial basis, for fun, it is shocking and disgusting that some dishonest people we do not even know dare to use the name and logo of our bootloader, OpenCore, as a matter of promotion in some illicit criminal scam. Be warned, that we are nohow affiliated with these people and strongly ask everyone by all means to never approach them. Be safe.

Following in the footsteps of Psystar, a new company called "OpenCore Computer" (No affiliation with the OpenCore Bootloader) this week launched a commercial Hackintosh computer called the "Velociraptor," which is a violation of Apple's end-user license agreement or EULA for macOS. 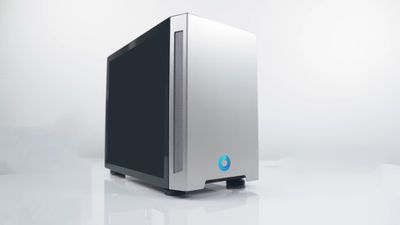 On its website, OpenCore Computer claims that it hopes to make Mac Pro-style workstations more accessible. The company's lineup of computers, which they call "zero-compromise Hackintoshes," are advertised as coming with macOS Catalina and Windows 10 Pro pre-installed. The first available model is the "Velociraptor," which is configurable with up to a 16-core CPU, 64GB of RAM, and a Vega VII GPU, and starts at $2,199. OpenCore Computer intends to launch more models at a later date, with options allowing for up to a 64-core CPU and 256GB of RAM.

Hackintoshes are computers that run macOS on hardware not authorized by Apple. OpenCore is a free open-source tool used to prepare a system for booting macOS. The company selling these Hackintoshes seems to have appropriated the name of the open-source bootloader, and has no affiliation to the developers of OpenCore. Hackintosh machines have to bypass copy-protection technologies that Apple uses to protect macOS from being cloned, affording them a dubious legal status when sold. OpenSource Computer reports that its computers "work just like a regular Apple Mac."

Commercial Hackintoshes have a notorious legal history. The now-defunct Psystar Corporation sold so-called "Open Computers" from 2008, with the option to have Mac OS X Leopard pre-installed. Apple's EULA forbids third-party installations of its software, and any commercial Mac clone is a violation of that agreement, as well as the Digital Millennium Copyright Act (DMCA). Apple sued Psystar in 2009 and won a permanent injunction against the company, and the U.S. Supreme Court declined to review the case in 2012. Given this precedence, it is particularly surprising that OpenCore Computer has chosen to sell a Hackintosh.

OpenCore Computer seems to be trying to get around the EULA by accepting payments in Bitcoin cryptocurrency only. In an attempt to prove that the company is not a scam, it offers the use of escrow payment through "Bitrated," which intends to bring consumer protection and fraud prevention measures to cryptocurrency transactions. Much like the skepticism levelled at Psystar in 2008 when it announced its Mac clone, the legitimacy of OpenCore Computer is unclear. No address for the company is given and there is little further information about it online.

minifridge1138
It would be one thing if a company was selling computers without an OS and advertised it as "100% Hackintosh Capable". But to actually include MacOS is just begging for Apple's lawyers to notice you.

Also, a site that says "just send us some bitcoin and we'll mail you a computer" sets off my Scam Detector pretty fast.
Score: 66 Votes (Like | Disagree)

high heaven
Why can't Apple make a normal desktop around $3000? It shouldn't be a problem. If you disagree, then you have a problem.
Score: 45 Votes (Like | Disagree)

Good for them, I hope they are real. Competition is good.

And, in this case, illegal. In case this isn’t clear, you also can’t steal the recipe for KFC and then “compete” selling fried chicken.
Score: 29 Votes (Like | Disagree)

Switchfoot
I owned one of the Psystar clones back in the day-- was surprisingly powerful and stable, if a little wonky on the install and bootloader. I installed it in a media application offline and never updated it, and it lasted until a flood in 2016 took out the whole office.
One of the best ~$500 I've spent on tech, I'll probably look into these for a similar use before Apple shuts it down.

Edit: Just checked, I still have Psystar's RebelEfi.iso file from 2009 in my download folder. Three cheers for data hoarding....
Score: 28 Votes (Like | Disagree)

Why would anyone buy a Hackintosh with Catalina preinstalled? Not only is it a dumpster fire of a MacOS release, you can only run 64-bit MacOS apps.

dspdoc
Maybe this company knows something we don't. Maybe Apple is going to make an announcement at WWDC that it is opening its EULA to allow people to buy their OS and install it on anything they like. ;)
Score: 24 Votes (Like | Disagree)
Read All Comments