Apple in November removed all vaping-related apps from the App Store, leaving people with app-connected vapes without a way to control their devices on their iPhones. 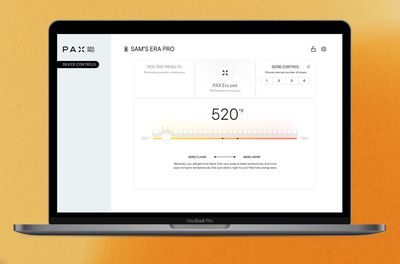 Vape manufacturer PAX has found a way to get around Apple's rules, launching a website that allows users to manage their PAX vapes. With the new web app, Era and Era Pro users can control their devices on Macs and PCs using Google Chrome, providing an alternative to the missing iPhone app.

When Apple pulled all vaping-related apps from the ‌App Store‌, the company cited CDC reports of thousands of lung injury cases linked to vapes and e-cigarettes, and called the spread of the devices "a public health crisis" and "youth epidemic."

Apple did not allow apps that sold vape cartridges, and the apps that were pulled offered vape-related news or controls for vape devices. PAX, for example, relied heavily on the ‌App Store‌ to add technology to its vapes, with the PAX app letting users adjust vaporizer temperature, set parental controls, verify the authenticity of cartridges, change light colors, and more.

After Apple outright banned vape-related apps PAX called on the company to rethink the decision, claiming that it was important for customers to "have access to important information and the ability to better control their cannabis experience."

Pax specifically cited its PodID feature that provides access to data about what's in vape pods, such as strain information, cannabinoid and terpene profiles, and state regulated test results, which could help vaporizer users avoid illicit and dangerous cartridges.

Apple refused to budge, however, leading PAX to create the website as an alternative. At this time, accessing the site can only be done on Mac and PC desktops using the Chrome browser, and it won't work with Safari.

The web app provides device controls, cannabis strain information, and safety features such as locking. These are the same options that were in the now-removed iOS app and can still be accessed on Android devices.

JohnD
Good for PAX. I don't agree with Big Brother Apple determining what's in my best interest. What's next?
Score: 21 Votes (Like | Disagree)

BittenApple
Apple is the new gatekeeper. Thanks for killing the soul of Apple Tim.
Score: 20 Votes (Like | Disagree)

Sadly there is not a way to have the creation of such websites banned yet.

Why would you want them banned? That’s immensely idiotic.
Score: 14 Votes (Like | Disagree)

Sadly there is not a way to have the creation of such websites banned yet.

What people do in their free time with their money is their business. No one needs or wants your opinion, supervision or approval. I am happy to live in the US knowing have a tremendous amount of freedom that is for the most part unmatched in the rest of the world.
Score: 14 Votes (Like | Disagree)

Apple is the new gatekeeper. Thanks for killing the soul of Apple Tim.

Them banning the app that the Chinese youth were using to organize their protests was a lot worse.
Score: 12 Votes (Like | Disagree)

icanhazmac
Don't want or need Apple to be a moral gatekeeper of apps.
Score: 11 Votes (Like | Disagree)
Read All Comments