In a blog post shared on Reddit, software engineer Philipp Defner has brought renewed attention to a years-old issue that results in Apple's Mail app randomly popping open as the frontmost application on the Mac. 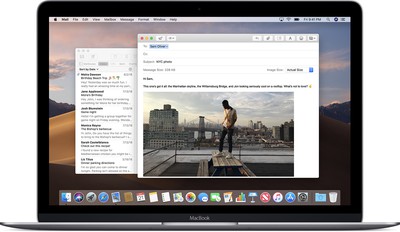 "If you are in full screen mode — like when you are giving a talk or watching a movie — it opens itself up in split view mode where it takes up half the screen while your other main window is being resized," wrote Defner, in line with similar comments shared across the MacRumors Forums, Apple Support Communities, and elsewhere.

The issue appears to be related to a potential connectivity or syncing issue with certain Gmail accounts, with some users noting that creating an app-specific password for your Gmail account is an effective workaround. Other users simply keep the Mail app minimized in the Dock instead of closed entirely to avoid it from popping open sporadically.

Defner notes that the issue has been occurring since at least macOS Sierra and continues in macOS Catalina. Affected users are hopeful that Apple can implement a fix, although it is unclear if there is anything it can do on its end.

B4U
"Apple is going to implement a fix"? The issue has been here since Sierra FFS!
Score: 14 Votes (Like | Disagree)

corrado7
I thought it was just me that this is really annoying
Score: 12 Votes (Like | Disagree)

Ojiisan
Nice to know others have been having this problem..
Score: 8 Votes (Like | Disagree)

clickerclacker
I'm glad this is making news. It did my head in for ages. I think I solved it with the app-specific password workaround. Can't remember! It doesn't happen anymore though.
Score: 4 Votes (Like | Disagree)

4jasontv
This happened to a classmate of mine during a test. Thankfully the proctor saw the window open on its own, but yeah, that could have been really bad.
Score: 4 Votes (Like | Disagree)

kvasa
Reported this to Apple years ago. Recently brought it up on their Twitter only to be told it's a known issue. Well, duh...

Saturday July 11, 2020 1:42 pm PDT by Arnold Kim
Casual MacRumors visitors may not realize that we have a very active PowerPC forum where users discuss issues related to PowerPC Macs that have not been produced since 2006. Threads range from hardware upgrades and software options to nostalgia: Photo by AphoticD Apple's recently announced transition to Apple Silicon (Arm) based Macs raised some interesting questions about future support...
Read Full Article • 95 comments