Prior to when Apple released the third-generation iPod touch in September of 2009, it explored a prototype version that had a centered rear camera, a feature the iPod touch ultimately did not launch with. 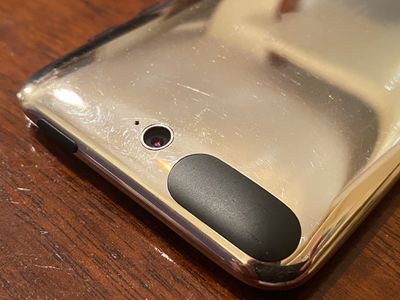 Giulio Zompetti, a developer who collects Apple device prototypes, today shared some photos of the third-generation iPod touch with rear camera, giving us a clear look at the design variation that Apple tested.

Back in August 2009, prior to when the third-generation iPod touch launched, MacRumors received photos of the prototype model with camera, sparking rumors that the upcoming device could launch with a camera.

At the time, it was believed that Apple scrapped the camera from the iPod touch late in the design process. Final versions of the iPod touch had an empty space where a camera might have been positioned.

After leaking in 2009, a prototype version of the third-gen iPod touch was spotted in a video in May 2010, and ahead of that, in April 2020, a couple of prototype models with camera showed up on eBay.

The eBay seller at the time said that he purchased the models at a flea market from someone who had bought them from a live auction in the Bay Area. Prototype devices like the third-generation iPod touch are hotly desired by collectors and surface on auction sites. Zompetti has in the past said that some of his devices are surfaced from device recycling facilities.

I would have killed for an iPod Touch with cellular connectivity back then.

AngerDanger
I remember being so disappointed that the 5th generation nano got a camera, but the more expensive iPod touch had to wait yet another year.

Still, there's just something about this that doesn't look quite right…

I bet the hardware wouldn't fit in the thinner upper edge area of the case. Looks better, but probably not physically doable back then.

Yeah, I suspect you're right. I'll bet they could've fit a lower res camera in the edge given the camera on the nano released that year, but the quality was terrible.

The curve on the back would make the camera angle to point in a different direction. If anything the antenna cutout is the one that could be lowered or extended down.

It was really more of a visual gag than a legitimate suggestion, but for what it's worth, the camera pictured isn't tangent to the hole in the iPod. It's actually inset and parallel with the screen. They ended up doing this with the fifth generation iPod nano; the hole for the camera is on a curve, but the camera behind it is flat:

I would have killed for an iPod Touch with cellular connectivity back then.