Apple released the first Apple Watch in 2015, but prior to when the original model was released, Apple worked on the design for several years. With every new device, Apple makes multiple prototypes, and today, a few Apple Watch prototypes surfaced on the internet. 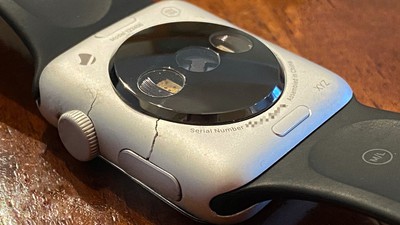 As highlighted by Vice's Motherboard, prototype collector Giulio Zompetti has shared images of a handful of Apple Watch prototypes that he's collected, all of which look similar to the first Apple Watch that Apple debuted, but with some unique differences in design and sensor placement.

Zompetti said that the Apple Watch prototypes were sourced from e-waste facilities, and while they're all broken, key components are intact and it is possible to repair them. His plan is to fix them and then sell them for thousands.

Some of the Apple Watches have a unique logo that's previously been seen on iPhone prototypes, and there are markings that suggest they are authentic, such as QR codes and serial numbers seen on other Apple prototypes.

Zompetti originally shared the images on Twitter earlier this month, and while no real interesting information can be gleaned from the prototypes, it's always fun to see Apple's early work on popular devices.
[ 36 comments ]

yaxomoxay
The LOREN IPSUM text on the Watch is just magnificent.
Score: 20 Votes (Like | Disagree)

Flow39
I remember when all the haters were saying what a failure the Apple Watch was going to be and how terrible the design was...now look at the Apple Watch! It's got a heavy majority of the market share and it's without a doubt the best smartwatch on the planet. WearOS and the Fitbit line can't even come close to touching it.
Score: 13 Votes (Like | Disagree)

The LOREN IPSUM text on the Watch is just magnificent.

I got to see the lorem ipsum one in person before Series 0 was released (can't say how) and it cracked me up. They knew writing around the sensor looked cool, but they just hadn't decided what the writing should be yet.
Score: 11 Votes (Like | Disagree)

Sirious
On a side note, can't believe its already been 5 years since launch this month!
Score: 9 Votes (Like | Disagree)

mtneer
Interesting. Although I am not sure who will pay thousands for a piece of electronics that looks like it already went through the crusher??
Score: 7 Votes (Like | Disagree)

Blackstick
"Someone's been digging in our garbage again, he knows we sell nice new ones for less money right?"