Apple's iPhones continue to rank highest when it comes to customer satisfaction, according to new data shared today by the American Customer Satisfaction Index (ACSI). 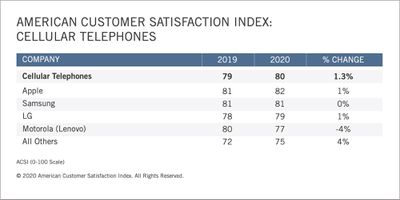 For customer satisfaction, Apple (+1% to 82) and Samsung (unchanged at 81) continue to wrangle as a small gain puts Apple on top. Apple's overall iPhone revenue rose 8% year over year in the 2019 holiday quarter with strong sales for its iPhone 11 series, which offers advanced cameras and improved battery life. ACSI data show that Apple customers overall are more pleased with their device's battery life compared to a year ago.

When it came to satisfaction rankings based on individual smartphones, however, Samsung's Galaxy Note 9 edged out Apple devices with a score of 85.

Apple and Samsung together dominated the individual brand rankings, and 17 of the 18 models that earned a score of 80 or above came from either Samsung or Apple.

The number-one phone is Samsung's Galaxy Note 9 with an ACSI score of 85. The Note 9 rates best in class for both phone features and video quality. The Galaxy S9+ and S10 follow at 84, tied with Apple's iPhone XS Max. All of these models are older, released in 2018, with the exception of the S10. All four also have screen sizes of 6.1 inches or more.

Today's report also covered customer satisfaction with mobile network operators. T-Mobile took the lead and Sprint came in last, though the data collected ahead of when the merger between the two companies was completed.

The ACSI's Wireless Service and Cellular Telephone report is based on interviews with 27,346 customers chosen at random and contacted by email between April 15, 2019 and March 20, 2020. Survey data was entered into ASCI's "cause-and-effect econometric model," which is designed to estimate customer satisfaction as the result of survey-measured inputs of customer expectations, perceptions of quality, and perceptions of value.

Picard J.L.
Looking at those numbers they make no sense whatsoever.
Score: 4 Votes (Like | Disagree)

billnye97
Samsung Note 9 owners, "I am extremely satisfied that this model did not blow up!"
Score: 3 Votes (Like | Disagree)

That's tired and played out and in no way nearly as bad as what the iPhone 6 did.

Google up the phrase EgyptAir iPhone 6 then come back here with more old jokes.


Because they tried to spin it in Apple's favor but the numbers tell a different story.

‘Ranking consistently higher‘ means absolutely nothing in the consumer world,

Let me guess tho, if your shiny idevice ranked higher, boy would it mean something then...
Score: 1 Votes (Like | Disagree)

I believe Samsung Galaxy Note has been ranking consistently higher than any other smartphone model for quite a while now.

‘Ranking consistently higher‘ means absolutely nothing in the consumer world, nor will this chart amount to anything when you look at the price of a smart phone. Consumers Are smart, they realize that with less than three years of android support for paying for a $1000 smart phone isn’t practical, iOS obviously is dominant because of the stability and overall track record of over five years of iOS support. The economy is not in a position anymore where consumers upgrade their phones on an annual basis.. It’s not about hardware anymore, it’s the platform you belong to for loyalty. I gather I’m Repeating something we all know, but I think your post is severely lacking that context intentionally.
Score: 1 Votes (Like | Disagree)

now i see it
Why does this seem suspiciously like the Academy Awards - Hollywood awarding Hollywood
Score: 1 Votes (Like | Disagree)
Read All Comments