Adobe today announced the launch of its traditional spring update for Creative Cloud apps that include Premiere Pro, After Effects, Audition, and Character Animator. Adobe says that this year's updates focus on efficiency and performance for maximizing creativity. 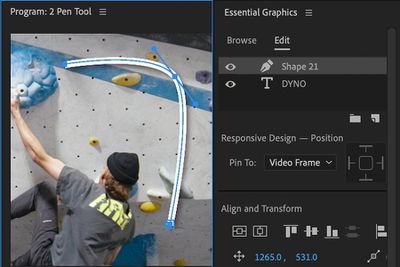 Both Premiere Pro and After Effects include ProRes RAW support, offering a cross-platform solution for Apple ProRES RAW workflows, and automatic audio hardware switching is available on Mac for After Effects, Media Encoder, Audition, Character Animator, Prelude, Premiere Pro, and Premiere Rush. That means when you swap audio devices or plug in headphones, your Mac recognizes the hardware and the Adobe app automatically switches to it.

Premiere Pro is gaining an improved Pen tool with better support for Bezier curves and more precision for lines and shapes, plus filter effects that show attributes limited to keyframes or adjusted parameters for focusing what's currently active.

Adobe is improving the speed of Auto Reframe in Premiere Pro, enhancing the tool that's designed to reformat and reposition video in different aspect ratios for users who need to create videos for multiple social media and content platforms. Premiere Pro is also gaining support for audio files in Creative Cloud Libraries.

In After Effects, Adobe is adding Tapered Shape Strokes for creating tapered, wavy, pointed, or rounded strokes on shape layers, which can then be animated for stylized looks and motion designs.

There's also a Concentric Shape Repeater available in the Offset Paths shape to create copies of a path that radiate outward or inward for retro designs. New Mask and Shape cursor indicators in After Effects clearly display which tool is in use to prevent unnecessary un-dos when creating shapes and masks.

Adobe Premiere Rush for iOS is being updated with a tool for resizing projects to the 4:5 aspect ratio used for Facebook and Instagram, and back camera switching allows users to capture video from all of the rear camera options on an iPhone. Premiere Rush is also gaining an option to import media directly from the Files app.

Character Animator features improvements to audio triggers and timeline filtering, along with a new collection of background puppets to work with.

All of Adobe's Creative Cloud updates will be available starting today, with additional information on what's new available on Adobe's site. Adobe's full Creative Cloud plans, which cover the complete range of Adobe CC software, start at $52.99 per month.

MVMNT
"Adobe says that this year's updates focus on efficiency and performance for maximizing creativity."

Erm... MULTI-CORE PROCESSING IN AFTER EFFECTS?
Score: 4 Votes (Like | Disagree)
Read All Comments