Apple today announced it has released two new Pride-themed Sport Bands for the Apple Watch, including a Sport Band and Nike Sport Band in 40mm and 44mm sizes. Both of the bands are available starting today on Apple.com and at select Apple Store locations. 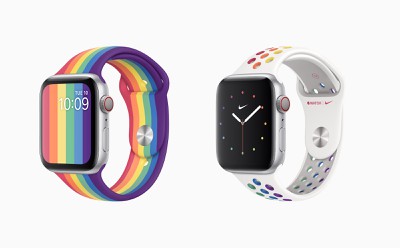 The bands can be paired with new matching Pride watch faces coming in watchOS 6.2.5, which remains in beta testing.

Through this effort, Apple and Nike said they are proud to support LGBTQ advocacy organizations worldwide, including GLSEN, PFLAG, The Trevor Project, Gender Spectrum, The National Center for Transgender Equality, and ILGA World, which brings together more than 1,500 member organizations in more than 150 countries and regions.

repoman016
I'm not even gay and i'd rock that nike one. That looks sweet
Score: 32 Votes (Like | Disagree)

martyjmclean
These are the first Pride bands I actually like. I’m gonna cop that Nike one!
Score: 14 Votes (Like | Disagree)

ck2875
I ordered both, but I’m worried the injection molding for the colors is going to be a bit wonky on the non-Nike band. My OCD immediately noticed that the colors aren’t perfectly straight (pun?) on the website images.

Friday May 14, 2021 11:52 am PDT by Juli Clover
Following the discontinuation of the iMac Pro, Apple also appears to be discontinuing Space Gray "Magic" accessories that it sold separately alongside the iMac Pro. The iMac Pro was the only Space Gray Mac, and Apple designed special matching accessories for it. The Space Gray Magic Mouse 2, Magic Keyboard, and Magic Trackpad all now say "While supplies last" in small wording at the bottom...
Read Full Article • 341 comments

Saturday May 15, 2021 11:08 am PDT by Juli Clover
Twitter has been working on some kind of subscription service since last summer, and Jane Manchun Wong, who often digs into new features coming in apps, has shared details on just what Twitter is exploring. Twitter's subscription service could be called Twitter Blue, and at the current time, it's priced at $2.99 per month. There will be a "Collections" section that allows users to save and...
Read Full Article • 111 comments