Newton Mail is continuing to operate beyond its original closure date after the service was bought by new owners (via The Verge). 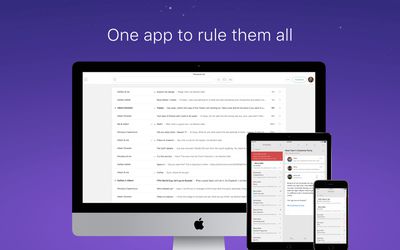 Newton was originally set to shut down on April 30, following previous owner Essential's decision to cease all operations earlier this year. Essential originally came in possession of the mail app through its acquisition of the CloudMagic team in 2019.

The new owners are software designers Maitrik Kataria and Justin Mitchell, who concede in a Medium post that they're not a "well-funded VC backed company" but are simply big fans of Newton Mail.

Like many of you, we were gutted to learn that Newton was shutting down, yet again. This time though, we had to do something. We scrambled to get in touch with Essential as fast as possible. After a rollercoaster of a bidding process, we were lucky enough to be chosen as the new owners of CloudMagic.

This wasn't easy for us. We aren't a well funded VC backed company. Nor are we a big corporation looking to acquire assets we can use. We are just an indie app development agency that loves building products.

Both Justin and I have years of experience in designing and building beautiful software products for startups and companies. We understand the ins and outs of product design and development but M&A (mergers and acquisitions) was a new rodeo for us.

Lucky for us, the circumstances around the buyout and recent economic situation, accelerated the sale and let us take over ownership of what we think is one of the best apps developed.

Existing users of Newton Mail shouldn't see any differences in the short term and the service will continue to cost $50 a year to use, but the new owners plan to bring better communication and customer support to users, as well as fix some bugs in the software. After that, they intend to roll out new features including a new dark mode within three to six months.

Users can also expect a revamped privacy policy that will help give them better control over their data and bring the service in line with GDPR compliance. In addition, existing users are being offered three free months of service, a 20-percent discount for lapsed subscribers who want to give Newton Mail another go, and a referral program for new customers.

The new owners are promising that if their attempts at running Newton Mail fail, they'll open-source the app and "find a way for self-hosted servers to support the product indefinitely."

For $50 a year I shouldn’t need “better control” over my data. They shouldn’t be data mining period. If I want an email service that data mines there are plenty of free ones out there
Score: 10 Votes (Like | Disagree)

jmitchell
Rest assured everyone, we will modify the privacy policy asap to reverse anything Essential added and ensure your data is your data. Give us some time to comb through the legalities and we promise to craft something that's awesome.

For $50 a year I shouldn’t need “better control” over my data. They shouldn’t be data mining period. If I want an email service that data mines there are plenty of free ones out there

No data mining happening here. We won't sell any of your data ever. Pinky promise. New privacy policy is inbound.

I’m extremely interested IF they go back to the old privacy policy of “your data is yours, we don’t do anything with it.” When Essential bought them, this moved to a “we can use your data for any marketing purposes we want” (paraphrased) including an Opt-out by email Facebook marketing scheme.

Absolutely will ditch any of the language around this that Essential added. We are working on this right now.
Score: 5 Votes (Like | Disagree)

Glad to see the new co-owner of Newton Mail here and responsive.

trashmac
I love this app. I cannot find a better alternative (and believe me I have tried).
I'm therefore happy to continue to support it (And I wish them the best of luck!).
Score: 3 Votes (Like | Disagree)

Okasian
I will be re-subscribing once all remnants of CloudMagic and Essiential (and/or other entities propped up by unsustainable VCs) are gone.

Keep the app simple, Keep the earnings reasonable, with linear growth only. You have my $50.
Score: 3 Votes (Like | Disagree)

1144557
Good luck after people got bent over twice with promises and company sold. Most wont come back a 3rd time now
Score: 3 Votes (Like | Disagree)
Read All Comments