Security researchers are scared to use, buy, or even talk about iPhone emulation software Corellium after Apple levied a lawsuit against the company, reports Motherboard. 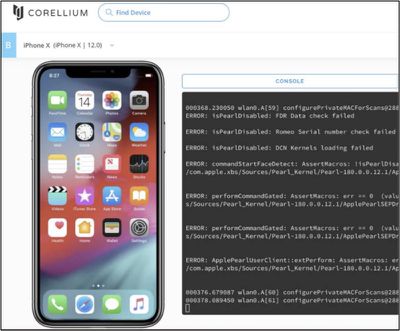 Apple in August 2019 filed a copyright infringement lawsuit against Corellium, a mobile device virtualization company that works with iOS. In the lawsuit, Apple claimed that Corellium had illegally replicated the operating system and apps that run on the ‌iPhone‌ and the iPad.

"Corellium has simply copied everything: the code, the graphical user interface, the icons - all of it, in exacting detail," reads Apple's lawsuit.

Corellium initially responded by suggesting that its software helps Apple by making it easier for security researchers to track down iOS bugs, but later said that Apple was waging war on jailbreaking and that the lawsuit should concern security researchers, jailbreakers, and app developers.

"Apple has created a chilling effect," a security researcher familiar with Corellium's product, who asked to remain anonymous because he wasn't allowed to talk to the press, told Motherboard.

"I don't know if they intended it but when they name individuals at companies that have spoken in favor [of Corellium], I definitely believe retribution is possible," the researcher added, referring to Apple's subpoena to the Spanish finance giant Santander Bank, which named an employee who had Tweeted about Corellium.

Not all security researchers, however, are worried. One researcher, Elias Naur, told Motherboard that he uses Corellium to test code written in the Go language for iOS devices. With Corellium, he no longer needs to test on two old and broken iPhones.

Security researchers have complained that Apple's lawsuit against Corellium is about Apple wanting control over research done on iOS and the bugs that are found.

Apple is continuing to pursue the lawsuit, and on April 20, asked Chris Wade, Corellium's founder, for all documents and communications related to him obtaining valuable dev-fused or prototype iPhones, which are designed for internal testing but sometimes escape Apple's clutches. Wade has denied using dev-fused iPhones for the development of Corellium.

It remains unclear how the lawsuit will ultimately turn out, but Apple is successfully making researchers think twice about using Corellium's tools amid the legal dispute.

Attirex
I don't even play a lawyer on TV, but I'm pretty sure you can't copy someone's IP w/o their permission and then make money from it.....? Right? Bueller?
Score: 14 Votes (Like | Disagree)

That's sad, security through obscurity is broken by design

What on God’s green earth are you babbling about?
Score: 11 Votes (Like | Disagree)

rp2011
Something so amazingly fishy about Correlium. Especially with the DOD on their side.
And how is a company able to copy everything thousands of engineers and years of work conjure out of thin air like that?
Score: 10 Votes (Like | Disagree)

Not all security researchers, however, are worried. One researcher, Elias Naur, told Motherboard that he uses Corellium to test code written in the Go language for iOS devices. With Corellium, he no longer needs to test on two old and broken iPhones.

What a great comment! That alone just proves Apple's case. Lets emulate the OS so no one needs to purchase devices. I can test code.. sell my services..all thanks to someone else ripping off Apple.. oh but I didn't do anything wrong here. You have got to be kidding me.
Score: 10 Votes (Like | Disagree)

luvbug
So, a company copies all the code out of another company's product, which is covered by copyright and any number of software patents, for its own purposes (to make money), but claims to be doing no wrong/harm?
Score: 7 Votes (Like | Disagree)
Read All Comments