Apple today filed a lawsuit against Corellium, a mobile device virtualization company that supports iOS. Corellium describes itself as the "first and only platform" that offers iOS, Android, and Linux virtualization on ARM.

In the lawsuit, filed today in the Southern District of Florida, Apple accuses Corellium of copyright infringement for illegally replicating the operating system and applications that run on the iPhone and the iPad. 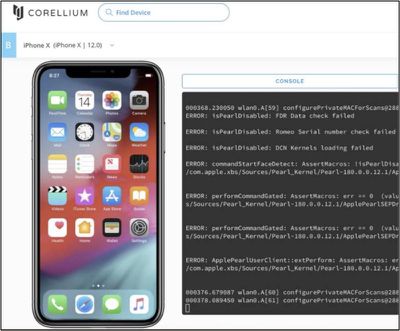 Corellium's business is based entirely on commercializing the illegal replication of the copyrighted operating system and applications that run on Apple's iPhone, iPad, and other Apple devices. The product Corellium offers is a "virtual" version of Apple mobile hardware products, accessible to anyone with a web browser.

Specifically, Corellium serves up what it touts as a perfect digital facsimile of a broad range of Apple's market-leading devices--recreating with fastidious attention to detail not just the way the operating system and applications appear visually to bona fide purchasers, but also the underlying computer code. Corellium does so with no license or permission from Apple.

According to Apple, Corellium's iOS virtualization product infringes on Apple's copyrights. "Corellium has simply copied everything: the code, the graphical user interface, the icons -- all of it, in exacting detail," reads the lawsuit.

Corellium's product creates digital replicas of iOS, iTunes, and user interface elements available on a web-based platform or a custom platform built by Corellium. It is designed to create virtual iOS devices for the purpose of running iOS, and at the recent Black Hat USA conference, Corellium emphasized that its "Apple product" is an exact copy of iOS, able to allow researchers and hackers to find and test vulnerabilities.

Apple goes on to say that though Corellium poses its product as a research tool for those aiming to discover security vulnerabilities, the company's actual goal is "profiting off its blatant infringement" by encouraging users to sell discovered information on the open market to the highest bidder.

Apple says it does not want to encumber "good-faith security research" but instead is aiming to end Corellium's "unlawful commercialization of Apple's valuable copyrighted works."

On information and belief, Corellium makes no effort whatsoever to confine use of its product to good-faith research and testing of iOS. Nor does Corellium require its users to disclose any software bugs they find to Apple, so that Apple may correct them. Instead, Corellium is selling a product for profit, using unauthorized copies of Apple's proprietary software, that it avowedly intends to be used for any purpose, without limitation, including for the sale of software exploits on the open market.

Apple is seeking a permanent injunction to prevent Corellium from continuing to offer a product that replicates iOS. Apple also wants Corellium to destroy all infringing materials that it's collected, and pay Apple damages, lost profits, and attorney fees.

Apple Inc. vs. Corellium, LLC by MacRumors on Scribd

dennyc69
Apple has a good case against them, I suspect Corellium won't have much of a chance defending themselves. You can't recreate someone's intellectual property without asking, especially code that is owned by Apple.
Score: 20 Votes (Like | Disagree)

I suspect Corellium didn't copy one line of code and wrote it themselves from scratch. The only thing copied were icons and graphics.

Corellium has simply copied everything: the code, the graphical user interface, the icons -- all of it, in exacting detail," reads the lawsuit.

Corellium emphasized that its "Apple product" is an exact copy of iOS, able to allow researchers and hackers to find and test vulnerabilities.

Corellium emphasized that its "Apple product" is an exact copy of iOS, able to allow researchers and hackers to find and test vulnerabilities.

Sounds like Apple should just buy them and use the virtual iOS as a tool for developers and researchers looking for exploits, better than handing out locked down devices to everyone.
Score: 13 Votes (Like | Disagree)

I suspect Corellium didn't copy one line of code and wrote it themselves from scratch. The only thing copied were icons and graphics.

That would entirely refute their claim to allow researchers to discover vulnerabilities in iOS.
Score: 12 Votes (Like | Disagree)

Jimmy James
This is virtually a locked down case.
Score: 8 Votes (Like | Disagree)
Read All Comments