The new iPhone SE, like the iPhone XR, ‌iPhone‌ 11, 11 Pro, and 11 Pro Max, features support for Haptic Touch instead of 3D Touch, which means that ‌3D Touch‌ has officially been eliminated from Apple's ‌iPhone‌ lineup as the now-discontinued ‌iPhone‌ 8 was the last ‌iPhone‌ Apple sold that supported ‌3D Touch‌. 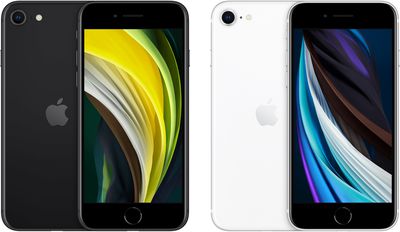 Apple first removed ‌3D Touch‌ from the ‌iPhone‌ XR in 2018, replacing it with Haptic Touch. The feature was then rolled out to the entire 2019 ‌iPhone‌ lineup, and now, added to the ‌iPhone SE‌.

‌Haptic Touch‌ is similar to ‌3D Touch‌ and offers a lot of the same functionality, but it is not pressure sensitive so there are no longer multiple functions for each press, such as the "Peek and Pop" gestures that were possible with ‌3D Touch‌.

‌Haptic Touch‌ is more like a long press or a press and hold with haptic feedback, and like ‌3D Touch‌, it works throughout the iOS operating system. It can be used by pressing in a relevant location until a small haptic pop is felt under the finger and a secondary menu pops up, with content varying based on where the feature is used.

For those coming to an ‌iPhone SE‌ from an older phone with ‌3D Touch‌, the transition to ‌Haptic Touch‌ will feel unfamiliar at first because it's slower than the ‌3D Touch‌ gestures, but because it ultimately works in the same way, most users should become accustomed to it quickly.

Eliminating ‌3D Touch‌ in favor of ‌Haptic Touch‌ across the ‌iPhone‌ lineup allows Apple to provide a similar interface experience for all ‌iPhone‌ and iPad models. For more on how ‌Haptic Touch‌ works and where it can be used, make sure to check out our Haptic Touch guide.

There were a lot of features tied to 3D Touch that allowed me to be faster at more complex tasks. I‘m worried we’ll never get that back.
Score: 43 Votes (Like | Disagree)

Also can't believe my iPhone X has all the 3D touch hardware and sensors, yet the functionality has been forced off my phone :(
Score: 31 Votes (Like | Disagree)

tobefirst ⚽️
Haptic touch, and the user interface that resulted from the elimination of 3D touch is a distinct downgrade from how 3D touch worked. Sad.
Score: 17 Votes (Like | Disagree)

esh314
Why does it say the battery life "lasts about the same as iPhone 8"? Shouldn't the lack of 3D Touch allow for a bigger battery, like it did in the iPhone 11 Pro?

Wednesday November 30, 2022 2:39 am PST by Sami Fathi
Geekbench scores allegedly for the upcoming "M2 Max" chip have surfaced online, offering a closer look at the performance levels and specific details of the forthcoming Apple silicon processor. The Geekbench results, first spotted on Twitter, are for a Mac configuration of with the M2 Max chip, a 12-core CPU, and 96GB of memory. The Mac listed has an identifier "Mac14,6," which could be...
Read Full Article • 259 comments

Wednesday November 30, 2022 12:43 pm PST by Juli Clover
Twitter CEO Elon Musk today met with Apple CEO Tim Cook at the Apple Park campus in Cupertino, California, according to a tweet shared by Musk this afternoon. Musk thanked Cook for taking him around Apple's headquarters, with no mention of what the two might have discussed. The meeting comes just after Musk on Monday claimed that Apple has "mostly stopped" offering ads on Twitter, and that...
Read Full Article • 339 comments